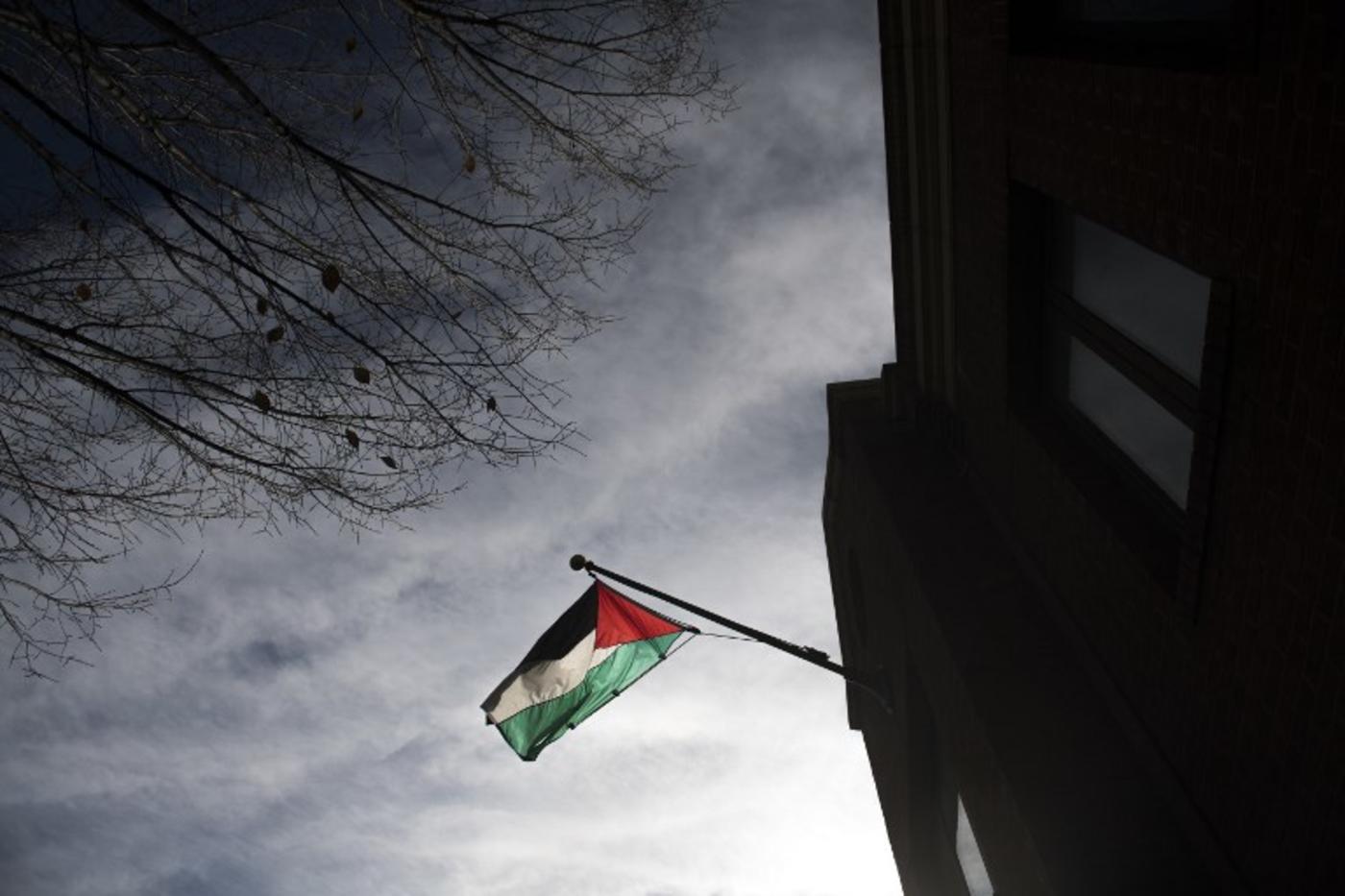 Israeli Prime Minister Benjamin Netanyahu's right-wing government could not have hoped for a better present for the 25th anniversary of the Oslo agreement: the decision by Donald Trump's administration to shut down the office of the Palestine Liberation Organisation (PLO) in Washington, its de facto embassy in the US.

Its opening in 1994, a year after the signing of Oslo, was a tangible expression of the US and Israeli recognition of the PLO as the legitimate representative of the Palestinian people. More so, it represented the US recognition that Palestinians should have representation - that their collective aspirations should be taken into account.

The spectre of Israel returning to run the daily life of the 2.5 million Palestinians in the West Bank haunts the Israeli army and its 'civil' administration

By closing the delegation, Trump is trying to turn the wheel 25 years backwards. The move undermines the very foundations of the Oslo Accords. What meaning does the agreement have if the US does not see one of its partners - the PLO - as a body independent enough to make its own decisions, without fear of being sanctioned by Big Brother in the White House?

We should have seen Netanyahu and his right-wing government dancing on the roof. From the day the Oslo deal was struck, it was vehemently attacked by Israel’s right wing. The accords were described as an act of treason against Zionism, the state of Israel and Jewish history at large. Yigal Amir, who assassinated prime minister Yitzhak Rabin in 1995, explained that he pulled the trigger "in order to stop the Oslo process and save the country".

Oslo was perceived by the Israeli right as being responsible for the Second Intifada and the killings of more than 1,000 Israelis (and 3,000 Palestinians, but they are not really counted). The slogan "let's bring the Oslo criminals to justice" was, and still is, popular among settlers and right-wing circles.

Now, when a US president is fulfilling his dreams, all Netanyahu has to say is that this was a 'correct' decision? Something does not add up

Yet the reactions to the latest US move have been rather mooted. Netanyahu described it as a "correct decision". Conversely, he and his ministers heaped praise on Trump's decision to recognise Jerusalem as Israel's capital and to move the US embassy there, calling it "an historic decision". Closing down the Palestinian delegation in Washington may have wider implications, but it got far less attention.

Generally speaking, since the embassy transfer to Jerusalem, it seems that the Trump administration and the Netanyahu government are moving on different tracks vis-a-vis the Palestinian issue. They may have the same goals - undermining the legitimacy of the PLO and of the Palestinians as a people with a right to self-determination, and getting rid of the two-state solution - but they move at different speeds. While the Trump administration charges on, Israel lags behind, without much enthusiasm.

This gap was manifested in the talks towards a truce between Israel and Hamas last month. The US seemed much more eager than Israel to reach a settlement, pushing Egypt and Qatar in that direction. It is not likely that the fate of two million Palestinians under siege in Gaza, or even the fate of Israelis living close to the Gaza fence, are close to Trump's heart.

Rather, he likely viewed this as an opportunity to further weaken the PLO and the Palestinian Authority (PA), and to push further away any possibility of an independent Palestinian state unifying the West Bank and Gaza.

This difference in pace between the US and Israel was even more pronounced with regards to UNRWA, the United Nations agency for Palestinian refugees.

Netanyahu's government, and previous Israeli governments, led a campaign against UNRWA, claiming that its schools were teaching students to hate Israel, its facilities sheltered Hamas "terrorists" and its very existence prevented a resolution to the Palestinian refugee problem. It seems, however, that the US decision to withdraw all support to UNRWA might have caught Israel by surprise.

Trump has repeatedly claimed that by moving the US embassy, he "removed" Jerusalem from the negotiating table. By cutting all aid to UNRWA and demanding drastic limits on the definition of refugees, Trump probably thinks he took that issue off the table too. Yet, by closing the Palestinian delegation in Washington, Trump seems to taking away the table itself.

Fighting Oslo has been Netanyahu's raison d'etre ever since he entered Israeli politics decades ago. His book A Place Under the Sun, published in 1995, was focused on Rabin's fatal mistake of negotiating peace with Palestinians. He led heated demonstrations against the Oslo process right up until Rabin's assassination.

Bringing down Oslo was his main slogan when he ran against Shimon Peres in 1996. And now, when a US president is fulfilling his dreams, all Netanyahu has to say is that this was a "correct" decision? Something does not add up.

The most evident explanation is that Israel has gotten used to all that Trump has been doing in its favour, and therefore, finds it harder to get excited. Alternatively, Netanyahu might have been working behind the scenes, or at least been very much involved, in each of Trump's moves - yet he prefers not to take responsibility.

"Netanyahu always wanted to wipe out Oslo," said a veteran high official in the Israeli administration, "and now Trump is pulling the rag under all the foundations upon which Oslo stood, yet Netanyahu is smart enough not to celebrate. He's afraid that if there would be a backlash, he would be held responsible."

This leads to another possible explanation. Israel's military and intelligence establishment is suspicious of Trump's moves. Retired General Amos Gilad, former head of the defence ministry's political-military affairs bureau, participated in endless interviews after the US decision to cut off funds for UNRWA, declaring that while the agency is "despicable", destabilising it "would harm our security".

The closure of the PLO office in Washington, combined with the cuts to UNRWA and to the PA, threaten the PA's very existence. More importantly, in Israel's eyes, this threatens its security cooperation with Israel. Israel's right wing tends to stress the need of PA President Mahmoud Abbas for this cooperation, as he sits on "Israeli bayonets".

Yet, almost all Israeli security and intelligence bodies agree this cooperation is vital for Israel.

The cooperation has allowed the Israeli army to operate almost undisturbed in all Palestinian areas, including Area A, which was supposed to be off limits to Israel under the Oslo Accords. Israel also benefits from intelligence information acquired through its cooperation with the PA. The spectre of Israel returning to run the daily life of the 2.5 million Palestinians in the West Bank haunts the Israeli army and its "civil" administration. They have no appetite to return to the pre-Oslo days.

So far, there has been no real backlash to Trump's moves against Palestinians. But if cooperation with the PA ended and Netanyahu had to send the Israeli army back into the hearts of Palestinian cities, he could suffer political damage. By avoiding taking responsibility for Trump's moves, Netanyahu is avoiding potential blame.

Still, there may be another explanation for Israel's reluctance to rejoice with Trump. Perhaps the view from Israel is different from that of the White House. Maybe what Trump sees as a matter of personal honour - a retaliation against Palestinians who dared to doubt his "deal of the century" in the Middle East - is not seen this way in Tel Aviv and Jerusalem. Maybe those living here understand that even if Trump and other donor countries cease all aid to the PA, the Palestinian struggle will not disappear.

Despite all its failures, the Oslo process has created a reality and an understanding that cannot just be wiped out at the will of a US president

Perhaps most Israelis realise that it is impossible to go back 25, or even 40, years to the days of Golda Meir, who claimed that "there is no Palestinian people"; or to the "village associations" that Israel promoted in the West Bank in the early 1980s as a means to counter the influence of the PLO.

In this sense, despite all its failures, the Oslo process has created a reality and an understanding that cannot just be wiped out at the will of a US president, no matter who he is. It's surely not a happy anniversary for the Oslo process, but maybe it is not yet its funeral procession, either.

Photo: The PLO office in Washington is pictured on 21 November 2017 (AFP) Palestine State
For Palestinians, Trumpism may come with a silver lining
Nada Elia