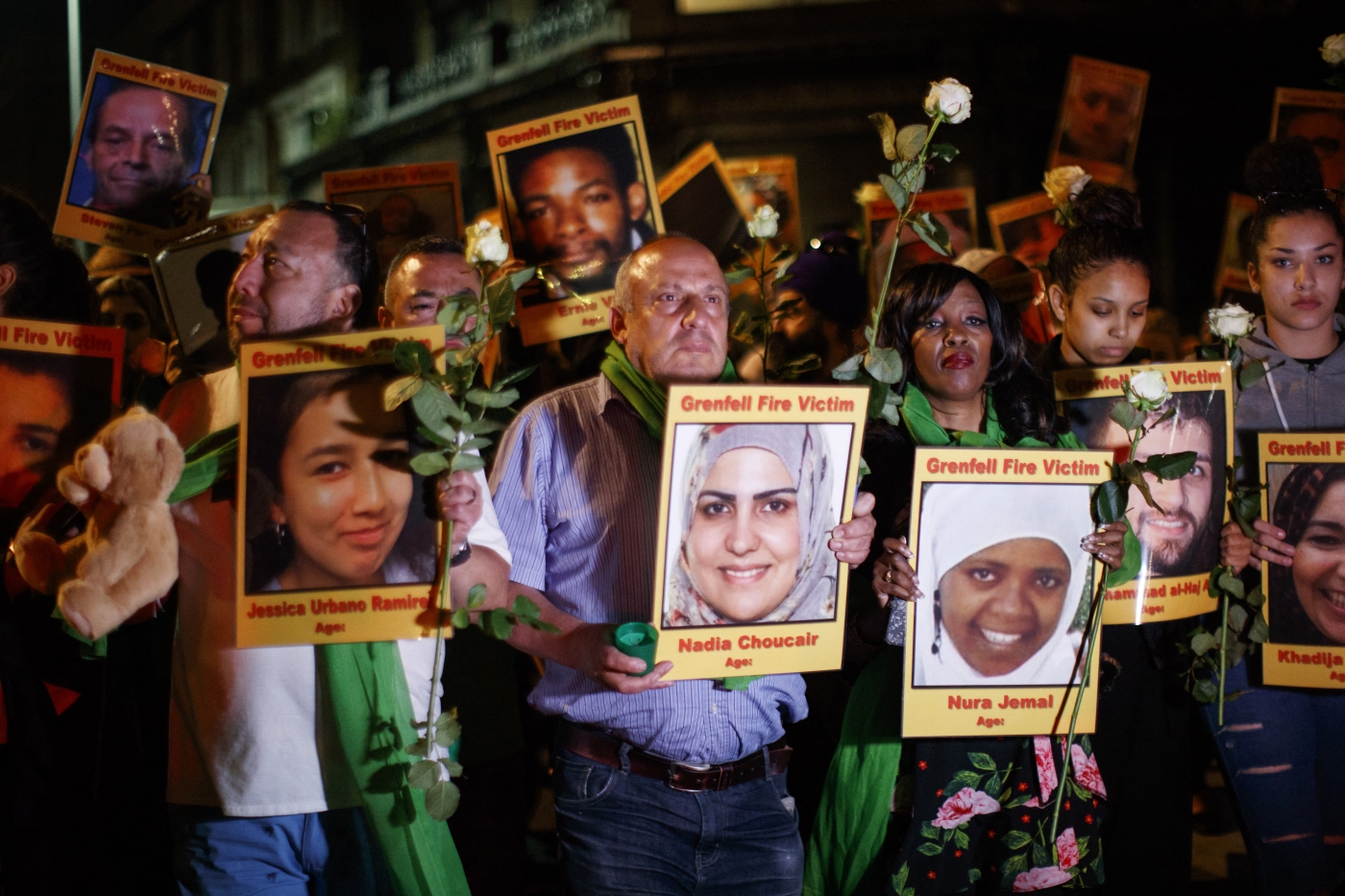 Katherine Hearst
Still awaiting the findings of the Grenfell Tower Inquiry, advocates argue that the fire is inextricably linked to race as a striking number of the victims were Muslim

Last week, to mark the fifth anniversary of the Grenfell Tower fire in June 2017, mourners walked from the foot of the high-rise, its skeleton now clad in white tarpaulin, through the leafy streets of North Kensington.

Five years later, the aftershock of the inferno is still deeply felt by every member of this community

Five years on, the aftershock of the inferno is still deeply felt by every member of this community. None more so than the teams running the churches and mosques that formed the backbone of the emergency response in the aftermath of the disaster.

“We were connected physically and emotionally to the tower,” Abdurahman Sayed, the director of the Al-Manaar mosque, a 20-minute walk from the tower, told Middle East Eye. One of Sayed’s colleagues, Hassan Awadh, was a resident in the tower and lost his wife, Rania Ibrahim, and two daughters in the blaze. "They met at the Al-Manaar [mosque]…for them it was like a second home,” Sayed said. He recalled how Ibrahim would bake a cake every Friday and share it with fellow congregants.

On the night of the fire, Sayed received a text from his colleagues saying a nearby building was on fire. "I replied to say, ‘Welcome anyone who comes in,’ and made my way to the [Muslim] centre," he said.

It was the month of Ramadan, and the mosque was well stocked with drinking water and dates. He loaded his car and headed directly to the tower. Unable to reach it as the area was cordoned off, Sayed went to the neighbouring Methodist church which was already teeming with volunteers.

"People were coming with whatever they had whether it was food [or] clothes," Sayed recalled. He gave the team his card and told them Al-Manaar wanted to help. He returned to the mosque to find it also packed with volunteers.

Along with the neighbouring churches, Al-Manaar’s response was quick-footed. Within a few hours, a series of texts had transformed their gilded halls into an emergency response hub. Two halls still retain the names “Grenfell 1” and “Grenfell 2.”

In the absence of any meaningful action from authorities, the local faith institutions had suddenly morphed into life rafts. It is the government’s sluggish response that Sayed remembers five years later.

In the weeks following the blaze, Sayed and his colleagues had their work cut out for them. They marshalled their thin resources to deliver aid and launched a counselling service for the bereaved. 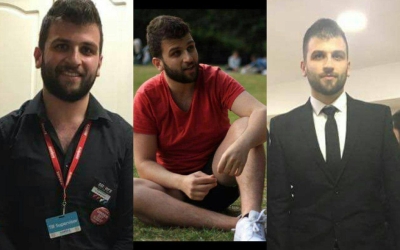 But anger and confusion in the community was mounting. Walls, billboards, and telephone boxes were papered with images of the missing.

“People were still unaware [of] what had happened to their loved ones…but there was no information. At least some kind of explanation was needed and people were getting really angry. We were concerned that things could go out of control.” Sayed told MEE.

The mosque adopted what Sayed termed a “bridging” role between survivors and the thus far silent authorities. The Al-Manaar leadership offered to facilitate meetings between the local authority, the police, fire brigade and the local community.

But answers were not forthcoming. “I remember, for example, a question being asked, ‘At what degree of heat, [do] the remains of a human being turn into ashes?’ A very senior person at the fire brigade gave a very uncertain answer,” Sayed said.

“We offered the halls we had…and we were willing to contribute our expertise. But even that was not properly utilised. [There were] quite a lot of questions raised and no satisfactory answers given,” Sayed recalled. “After three weeks it became very difficult to justify not having answers for the questions that people had.”

The meetings were chaotic due to the lack of preparedness by authorities who leant heavily on the staff of Al-Manaar. Sayed was asked to chair the meeting. He said: “I knew I was being put at the forefront and probably [at the] receiving end of any anger, but I was happy to at least encourage the engagement… but then, almost like an hour (before the meeting) I was like, where is the agenda, who are the speakers?” Minutes before another meeting an officer had asked Sayed for a microphone, he recalled.

“I was feeling a bit abused really at the time. This is in hindsight, and this is really the first time I’m saying this,” he said with a bemused smile.

A statement sent to MEE by a Kensington and Chelsea Borough Council spokesperson in response to MEE questions said: "The council acknowledges that there were significant failings in how the aftermath of the fire was handled and has detailed these in its responses to the public inquiry. We apologise for the impact we know this had on the bereaved and survivors.”

A documentary, verbatim play, Dictating to the Estate, was also staged to mark the anniversary of the fire. Based on the testimonies, council reports, emails and blogs from the Grenfell action group blog, it documents the events and wider policies that led up to the disaster.

This paper trail charts a series of warning signs that were ignored including power surges and a fire inspection revealing faulty air vents. It also details the systematic stonewalling of the concerns of the black and brown tenants of the tower in the run-up to the fire by the building’s tenant management organisation.

As the lights fade, the audience is left with the names of the dead projected on a screen: Choucair, Ibrahim, Hassan, Hashim. They reveal a stark truth - that a striking number of the victims were Muslim.

The Grenfell Muslim Response Unit has estimated that 80 percent of those living in the tower were Muslim.

“I can’t breathe,” were the last words uttered by Nadia Choucair who died with her children on the 22nd floor of the tower. Her words were eerily echoed in George Floyd’s final pleas as he suffocated beneath Derek Chauvin’s boot in 2020. Amid the Black Lives Matter protests that erupted in the wake of Floyd’s death, campaigners fought to widen the scope of the Grenfell inquiry to include the question of racial discrimination.

"The Grenfell fire did not happen in a vacuum,” Leslie Thomas QC reminded the public inquiry in his opening statement in June 2020. “The statistics are glaring, a stark and continuous reminder that Grenfell is inextricably linked with race. It is the elephant in the room,” he said.

In his submission, he urged a broader assessment of the context for the blaze - an erosion and degradation of social housing stock, in which black and brown tenants were disproportionately concentrated.

According to the English Housing Survey, conducted between 2014-19, "just one percent of white households lived in high rise flats, compared with three percent of Asian and seven percent each of black and other ethnic minority HRP households".

Housing inequality was cited as a key driver of the disproportionate death toll experienced by communities of colour in a Public Health England (PHE) report on health inequality. Much as the Grenfell inquiry excluded racial discrimination from its terms, the report was initially censored.

The determinants of ethnic disparities in mortality rates outlined in the report - deprivation, overcrowding and occupational exposure - are true for the Muslim community which suffered the highest death rates out of any religious group during the pandemic.

For Sayed, the analogy between the disaster and the mounting Covid-19-related deaths among his congregation was striking.

As the scene at Grenfell unfolded, the ornate halls of the mosque were filled with emergency parcels. During the pandemic, the mosque once again morphed into an emergency hub. The counselling service launched by Al- Manaar for survivors of the blaze was extended to congregants during the pandemic.

The team at the oldest Muslim funeral service in the UK, Haji Taslim, was painfully reminded of the tragedy while being “overwhelmed” with bodies during the first wave of the pandemic.

Abu Khaled, one of the directors, recalls receiving repeated calls from a client reporting the deaths of one family member after another from Covid-19.

“Grenfell was very difficult for me personally because one [client] that even keeps in touch now, he lost his siblings and his parents. And it was all in one night…what do you say to that person?” Khaled said.

Sayed’s overriding feeling five years later is one of disappointment. “It’s no different from the first anniversary, or even the day itself,” he concluded wearily. “The only difference is the tower is not in flames anymore. The scar and the wound is still there, fresh.”

The outline of the tower still looms over the silent march. Obscured by tarpaulin, its future, like the outcome of the inquiry, is still uncertain

When MEE approached the Grenfell Tower Inquiry for comment, the press office responded by saying: "The inquiry's investigation are split into two phases. Given the scale of the Inquiry’s investigations, both periods of work have taken several years to complete. For context, Phase 1 hearings lasted for a year, and it took the Inquiry chairman around one year to write the Phase 1 report.

"The Inquiry was also delayed by unexpected events such as the coronavirus pandemic. We are not yet in a position to indicate when the Phase 2 report will be published. However, given the volume of material to deal with and the time taken to write the P1 report, a year is a reasonable estimate."

Sayed said: "This is a chapter that has just been opened but not closed yet.” He had daily proof of this anguish, in his colleague, Hassan. "I remember one of those [days]. I was having lunch in the canteen…somebody from the community saw that [Hassan] returned to work, and started asking him how he was doing and whether he is managing to overcome the bereavement…he couldn't finish his lunch, he just stood up and left the canteen,” he added.

The outline of the tower still looms over the silent march. Obscured by tarpaulin, its future, like the outcome of the inquiry, is still uncertain.

The route of the silent march is now demarcated by something more permanent: paving stones engraved with the word, “Justice", translated into all the different languages spoken in Kensington. They had been installed as part of a collaborative project between Al-Manaar and the arts collective, Acava.

"They will be there forever," Sayed said with a smile. 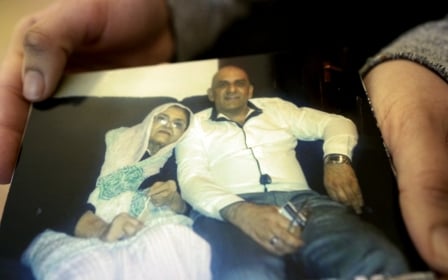 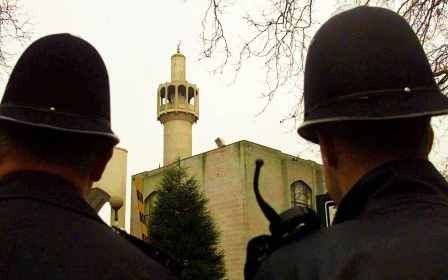 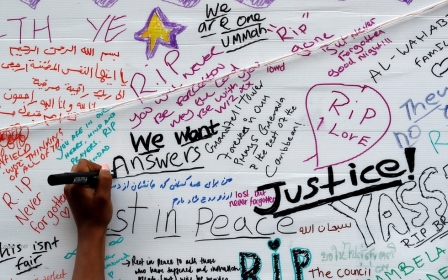 Politics
London on fire: This could be a Titanic moment for our ruling elite
Joe Gill