Hailed as a superfood for its antioxidant properties, the ruby red seeds of this remarkable fruit have been savoured for centuries, and hold a special religious and cultural significance 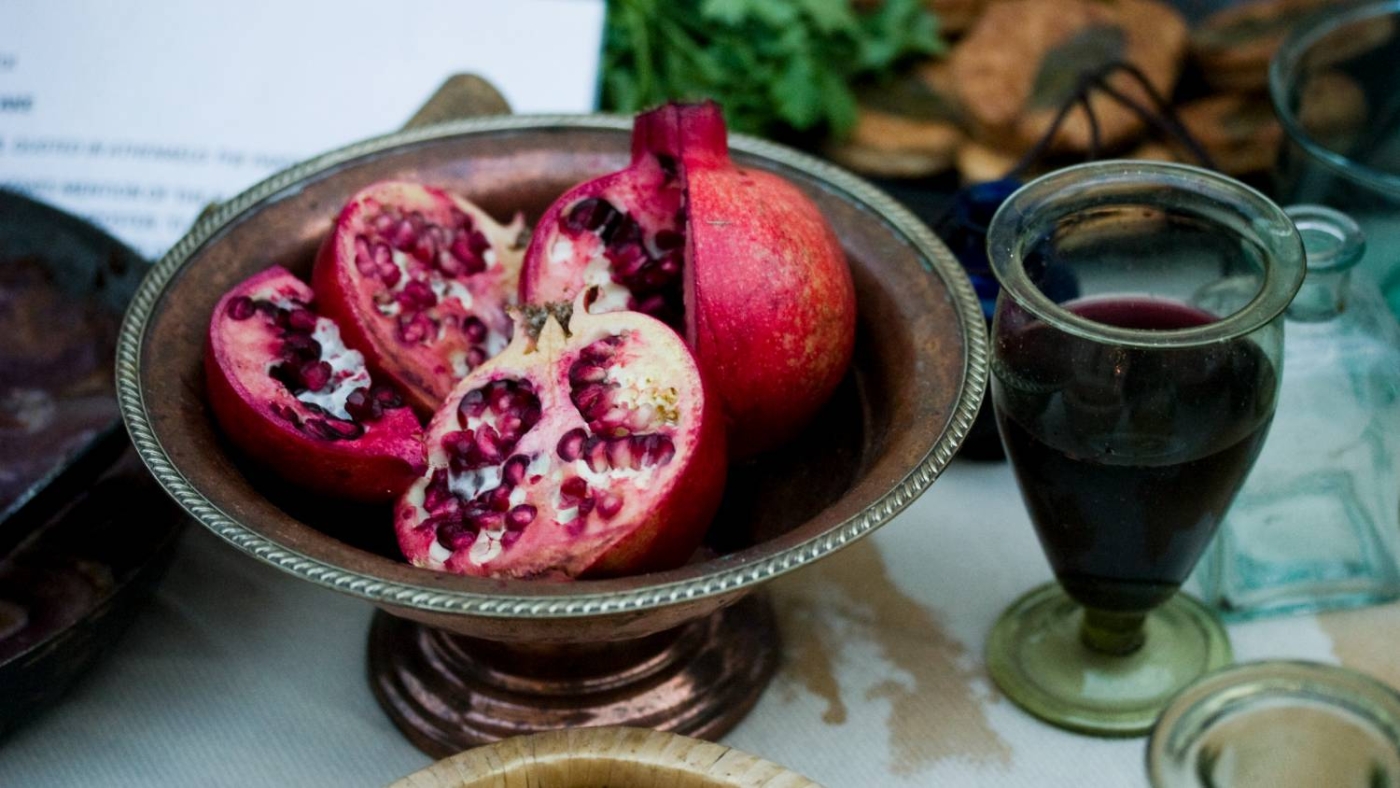 It is a familiar scene in many Middle Eastern households: hands dripping in blood-red juice after peeling and opening a ripe pomegranate; seeds, like gemstones, offering pockets of a sweet-sourness, piled into a bowl and then eaten by the spoonful - a single seed is never quite satisfying enough.

The pomegranate is not only rich in flavour, but also in cultural history. Some religious historians claim it was the forbidden fruit that tempted Adam and Eve into the Garden of Eden, and not the apple - its Latin name, punica granatum, means grainy or seeded apple.

Its earthly story begins right at the start of recorded civilisation, with the fruit being one of the earliest cultivated by humans.

As early as 5,000 years ago, the pomegranate was being grown in what is now Iran and Iraq, with cultivation spreading east as far as India, west into Egypt, and north in what is now Turkey.

A relative of the plant can also be found in Yemen's south-easterly island of Socotra, a place with its own unique biodiversity.

Symbolism and rituals developed around the fruit that persist to this day, with the ancient Persians holding that its seeds represented fertility and the cycle of rebirth, a belief shared by their Greek and Egyptian contemporaries - with pomegranate-shaped vases found in Tutankhamun's tomb.

In parts of modern-day Greece and Turkey, it's still tradition for a new bride to throw full pomegranates through the door of her new home - with the scattered seeds representing the number of children the newlyweds will be blessed with.

The Akkadians of Mesopotamia also equated the crimson-red arils of the fruit with fecundity and would offer the fruits to statues of Ishtar, the goddess of love, reproduction, and fertility.

For the Babylonians, the flowering fruit was revered and said to have featured prominently in the Hanging Gardens of Babylon, one of the Seven Wonders of the Ancient World, as designated by the Greeks.

The pomegranate's modern-day status as an anti-ageing superfood may not be far-fetched, as once the fruit also represented eternal life.

The Persian King Xerxes, who ruled in the fifth century BCE, is said to have fielded an army of warriors holding spears topped with pomegranates made of silver and gold instead of sharpened blades, as a symbol of strength and immortality against the Greeks.

First cultivated in the orchards of Yazd in central Iran, also the home of Zoroastrianism, which makes ample use of the fruit in its rituals and rites.

The pomegranate is still used in the region today in coming-of-age ceremonies known as "navjote", which requires the person being inducted, to chew on a pomegranate leaf to benefit from its medicinal properties and links to a long life, after taking a purification bath.

Traditionally sips of the fruit's juice would be given to those at death’s door in the hope that it would heal them and prolong life, and a few seeds from the fruit would also be placed in the mouth of someone who had already died.

This particular ritual was also performed by the Sumerians, who lived in neighbouring Mesopotamia and considered the seeds to be sacred. By offering them to the deceased, they believed the person who had died would become immortal.

This appears to have been a recurrent theme in the ancient world.  A wooden box in the shape of a pomegranate was discovered during an archaeological dig in a Hyksos tomb in Jericho, home to one of the world’s first cities. Inside the box were carbonised pomegranate seeds dating back to 3000 BCE, possibly intended for the deceased to carry with them into the next life.

In the wreckage of the Uluburun shipwreck, dated to 14th century BCE and located off the coast of modern Turkey, archaeologists found pomegranate seeds and skin, along with ivory and ostrich eggs and other items that indicated wealth, suggesting the fruit, now a staple of the Middle Eastern palate, may at one point have been enjoyed by a select few.

In Greek mythology, the plant is also called "the fruit of the dead" and is said to be grown from the blood of Adonis. But the fruit here appears to to transcend the worlds of the living and the dead and was most famously offered to Persephone by Hades.

The Greek god of the dead falls in love with Persephone the daughter of Zeus, at first sight, capturing her and carrying her into the underworld where he is king. Persephone's devasted mother Demeter, the goddess of harvest, roams the earth in search of her daughter and her sorrow stop crops from growing causing the winter months.

Demeter begs Hades for her daughter's return but he only partially agrees, feeding Persephone six pomegranate seeds, which allow her to return to the earth for half of year and stay with him for the remainder.

The Bible mentions the fruit when describing decorations on the pillars of the First Temple built by the king and prophet, Solomon, in the 10th century BCE.

Babylonian conquerors destroyed the temple in the 6th century BCE, and the pillars are believed to have been looted since.

The Book of Deuteronomy mentions pomegranates as one of the plants of the "Promised Land", establishing the fruit's prominence in Judaism. The faithful consider it one of the seven special foods that can be offered at times of prayer at temples.

"Rimon", as it’s called in Hebrew, is also eaten on Rosh Hashannah, the Jewish New Year, as early Jews believed each pomegranate had exactly 613 seeds, the same as the number of commandments or "mitzvot" in the Torah. Although that is no longer believed, the fruit still represents knowledge and righteousness in Judaism.

Representations of the fruit can also be found on the top of some ornate silver covers known as "rimonim", that hold sacred Torah scrolls; and yarn shaped into pomegranates can still be found decorating the hems of some rabbinical robes.

In Christianity, Renaissance-era artists would depict an infant Jesus in his mother’s lap, often clutching a pomegranate - this time to symbolise new life and hope for humanity. This association appears in a number of artworks throughout both the 15th and 16th centuries.

Some theorists suggest the fruit became a symbol for the church, as its seeds represented the union of the congregation. Its blood-red colour has been associated with the blood of Jesus, while its unassuming rough outer-skin masking a fruit bursting with vibrant life and colour, is seen as symbolic of humility.

In Islamic tradition, the Quran mentions the fruit, "ruman" in Arabic, as one of the fruits of paradise, although Islamic jurists have long debated whether these are symbolic or literal descriptions.

According to some scholarly accounts, Muslim traders who travelled to Spain in the 8th century found a Jewish community settled in a region growing the ruby-red fruit. The merchants named the area Gharnata al Yahud, meaning "pomegranates of the Jews", which later evolved into the shortened Granada.

Turkish lore suggests the founder of the Ottoman's, Osman Ghazi, loved the hardy fruit. Locally produced handicraft and home decorations often feature the fruit as a tribute to Osman.

In Iran, the assumed birthplace of the fruit, there is a belief rooted in Islamic mysticism that eating the fruit brings spiritual blessings, as well as health benefits.

The country also hosts a countrywide annual pomegranate festival in November, when the fruit is at its ripest, called "Jashn Anar".

In doing so, they reflect a millennia-old religious and cultural fascination with the fruit.

One saying attributed to the eighth Shia imam, Imam Reza, claims the one who eats pomegranates becomes "beautiful".

The later Persian poet and author of the Iranian epic Shahnameh also made the association between the pomegranate and beauty.

Describing the mythical princess Rudabeh in Shahnameh, he writes that "her mouth a rosy pomegranate. Her lashes dark as a raven's wing. If you seek a brilliant moon, you will find it in her face." 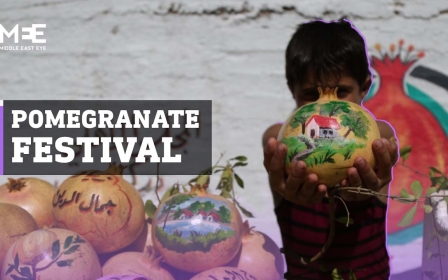 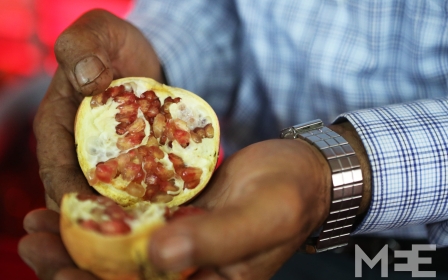 Variety
In Jordan, celebrating the pomegranate 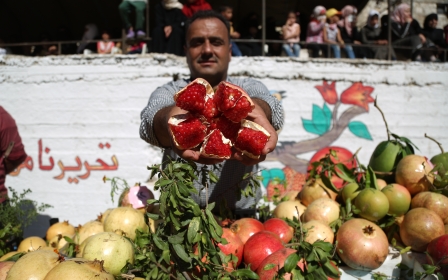