Rabaa shadow looms over jailed photojournalist: 'He is everything to me'

The fate of award-winning Egyptian photographer Shawkan will be determined on 8 September. His family talked to MEE 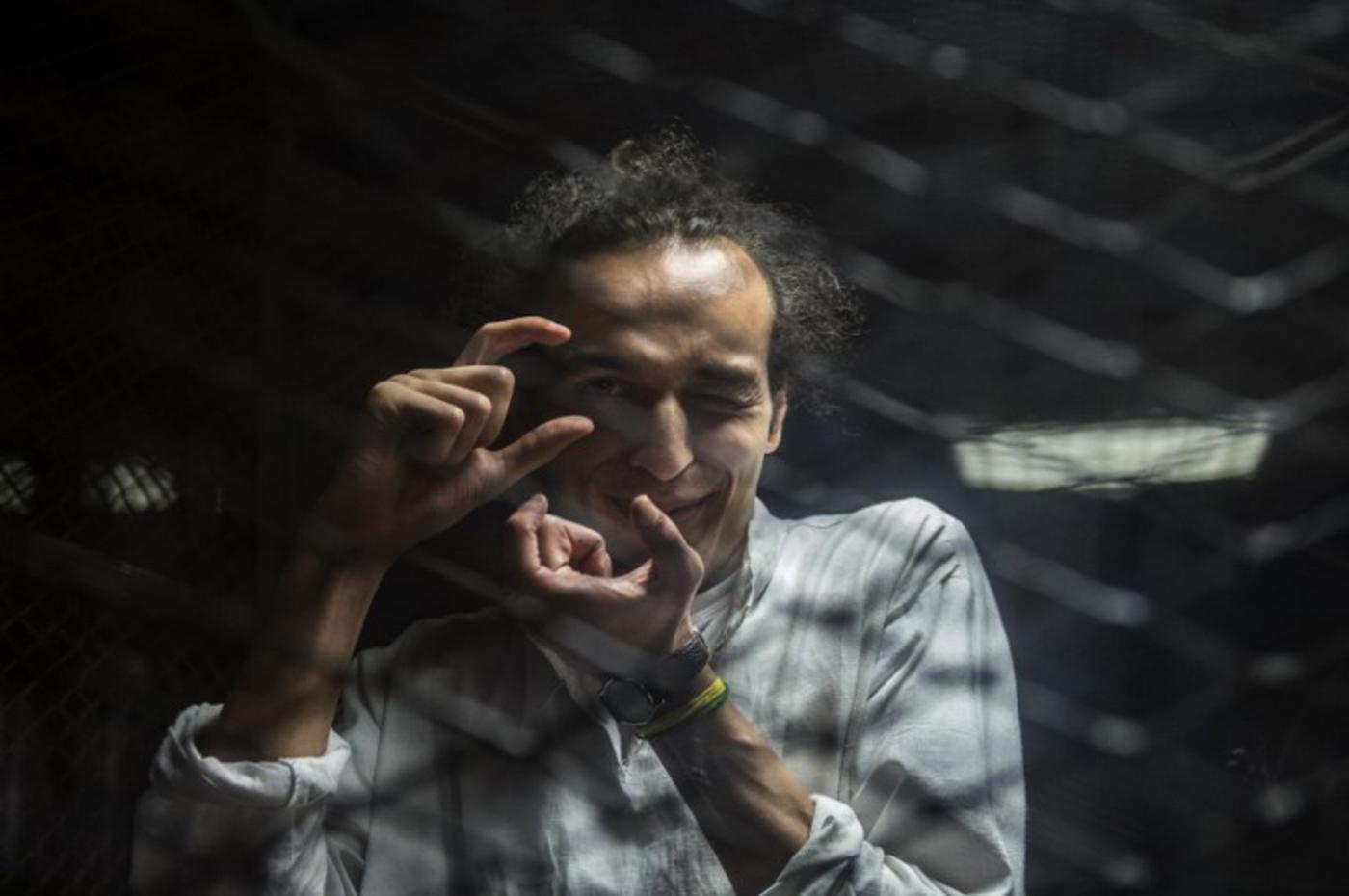 Egyptian photographer Mahmoud Abdel Shakour, known as Shawkan, gestures from inside a soundproof glass dock, during his trial in Cairo on 9 August 2016 (AFP)
By
MEE correspondent

As news of the rising casualties started to trickle in, their hope of finding him started to dwindle.

After enquiring at neighbouring police stations and not finding any trace of him, they went to hospitals "thinking that he might have been killed during the dispersal," says Mohamed, Mahmoud's brother.

When they received a message on 16 August 2013, saying that their son had been detained, they knelt down in prayer and thanked god Mahmoud had not been killed in the violence.

“But we had no idea that his detention would last five years,” his 72-year-old father, Abdel Shakour, tells Middle East Eye from the family home near the Giza pyramids.
Mahmoud, a 31-year-old award-winning photojournalist known as "Shawkan," was arrested while he was taking pictures of security forces dispersing the Rabaa sit-in on 14 August 2013.

On that day, rights groups estimate that at least 817 demonstrators - and most likely more than 1,000 - were killed as security forces cleared Rabaa square of protesters supporting ousted President Mohamed Morsi, the first elected civilian president of Egypt and a high-ranking member of the Muslim Brotherhood.

Egypt has defended the way in which the protesters were cleared, saying it had given them the opportunity to leave peacefully and that armed elements within the Muslim Brotherhood initiated the violence, killing eight members of Egypt's security forces. But according to the 2014 HRW report, the five main entrances of the square were attacked by police and armed forces without leaving a safe exit for the injured protesters and those desperate to escape, adding that in many cases security forces fired on protesters attempting to flee the violence.

According to HRW, Egypt's security forces attacked protesters - which included women and children who had been camped out for more than 45 days - by using live ammunition, armoured personnel carriers (APCs), bulldozers, ground forces and snipers.

During the turmoil, hundreds of protesters were arrested, innocent bystanders were detained and many have been locked up in prison ever since.

‘He loved his job’

Mohamed reminisces on how he used to take long walks with his brother Shawkan and spend time with him before his arrest on that fateful day.

"Our lives changed a lot since my brother Mahmoud was arrested. I lost the person I used to always turn to for advice, even though he is my younger brother. We were very close,” Mohamed explains. “Shawkan is everything to me."

According to 36-year-old Mohamed, Shawkan's imprisonment has also taken its toll on their parents, who have fallen ill due to the constant stress and worry concerning their son.

Our lives changed a lot since my brother Mahmoud was arrested. I lost the person I used to always turn to for advice

“My father now suffers from chronic high blood pressure and my mother lost many of her teeth because of the constant anxiety. Her health is deteriorating constantly and she is always suffering from nightmares.”

On 23 April, Shawkan received the 2018 Press Freedom Prize awarded by the United Nations cultural agency UNESCO, which says that his detention is a human rights abuse. Egypt's government criticised UNESCO for its decision to honour someone accused of "terrorist and criminal acts".

International rights groups have repeatedly denounced Shawkan's arrest and called for his release, including Amnesty International, which says he was imprisoned merely for doing his job as a photojournalist at a public demonstration.

In March, UN human rights experts condemned a decision by the Egyptian prosecutor to seek the death sentence against Shawkan.

“Journalists and media workers covering protests should not be criminalised for their professional duties and they certainly should not be facing the death penalty for doing so,” said the UN experts.

On her part, Shawkan’s 65-year-old mother Mahrous tells MEE that her son has never taken sides in any political conflict.

At the time, neither of his parents were aware that he was heading to Rabaa square to cover the dispersal. He informed his brother when he was one hour away from Rabaa square.

“If I had known, I would have prevented him, but he loved his job," Abdel Shakour says.

According to his parents, this was the first time he had gone to the square since the six-week sit-in had started.

Mohamed received the news of Shawkan’s arrest from a French photojournalist named Louis Jammes who had been detained with him and another American journalist named Mike Giglio. Both foreign journalists were released hours later, while Shawkan, an Egyptian national, still remains in prison.

“There were foreign journalists also detained with him at the same day and in the same place and were released hours later, so why wasn’t Mahmoud released?,” says Mahrous.

On 16 August at 3pm, Mohamed received a very short phone call from Shawkan saying that he was being held at Cairo Stadium and that he needed a lawyer; then the phone call was cut off.

Mohamed expected his brother to be released after a short while “but it turned into a nightmare that is still ongoing”.

'A metal bar between us'

In an open letter he wrote from prison in April 2015, Shawkan describes being beaten during his arrest and then the authorities moving him to Cairo Stadium with other journalists and protesters for the rest of the day. They then transferred him to the Nasr City Police Station where he was tortured for three days.

According to Shawkan's letter, he could hear the officers dicussing how they could best torture their prisoners and inflict the most pain. Five officers simultaneously beat him with a belt and their fists and they kicked him with their boots repeatedly before he collapsed onto the floor. But this didn't stop them from continuing, as he tried to close his eyes, a metal buckle smacked him on his eyes and everything went dark.

Shawkan was eventually transferred to Abu Zaabal prison and after a month of detention, his family was finally allowed to visit him once a week. His brother recalls that they would have to wait for up to eight hours outside before entering and that the visit would only last between two to five minutes.

There were foreign journalists also detained with him at the same day and in the same place and were released hours later, so why wasn’t Mahmoud released?

“The visits would be conducted through a metal bar between us. And if we wanted to get him some food, the prison administration would take it to give to him,” says Mohamed.

Conditions slightly improved when he was moved to Tora Prison in December 2013, where he is currently being held. According to Mohamed, the family waits for about five to six hours before entering, though visits can last to over 30 minutes.

“Visitation day is an exhausting day because of the crowds, long queues and hot weather, especially for my old parents,” he says.

Mohamed still laments about his brother's conditions in prison.

“Mahmoud’s conditions in prison are not stable. Sometimes we find him well and other times he’s in a bad state because no matter how well a person is treated inside prison, he will be lacking the care he gets outside prison,” he says.

Shawkan was held for more than two years in pre-trial detention – a practice heavily criticised by rights groups. In August 2015, he was referred to trial alongside over 700 other defendants on charges ranging from participating in unauthorised protests, to murder, to membership of the banned Muslim Brotherhood group.

On 28 July this year, the Cairo Criminal Court sentenced 75 people to death in the case, including top figures from the Muslim Brotherhood. However, a verdict in Shawkan's case is scheduled to be announced on 8 September.

“I was so nervous, my father and mother fell ill, but after we realised Shawkan did not make the list [of people on death row], we felt temporary relief,” he says.

According to Mohamed, Shawkan's lawyers predict that even if he is sentenced, it will not be for more than the five years he has already spent in prison. Although Shawkan’s long wait is almost over, he and his family are growing anxious about the final verdict that will determine his fate.

Shawkan’s parents last visited him on 2 August and noticed that he had lost some weight; and with the verdict looming, he looked stressed.

According to Mohamed, Shawkan has been suffering from a lack of sleep, exhaustion and extreme psychological pressure.

Before his imprisonment, Shawkan was diagnosed with Hepatitis C, and according to the Committee to Protect Journalists, his health has deteriorated while in prison.

According to the Association for Freedom of Thought and Expression (AFTE), the prison administration has refused to transfer him to a hospital and it is not providing him with medical care.

In December 2016, his lawyer demanded his release on health grounds and requested a forensic medical examination. But the forensic report, presented during a 20 May 2017 court hearing, dismissed any health conditions and denied him release.

"His health deteriorated in prison. No matter how things are in prison, it's still bad, especially when he's [involved in] such a very tough political case," Mohamed says. 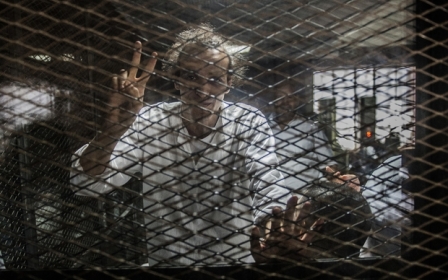 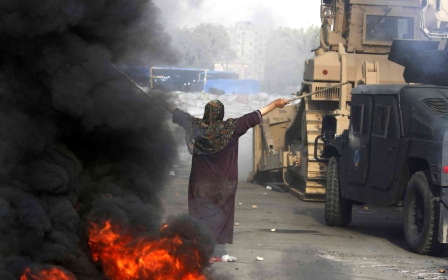 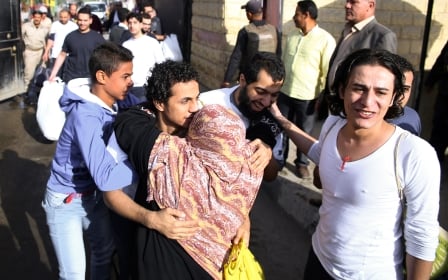