'Between a rock and a hard place': Palestine activists slam Biden 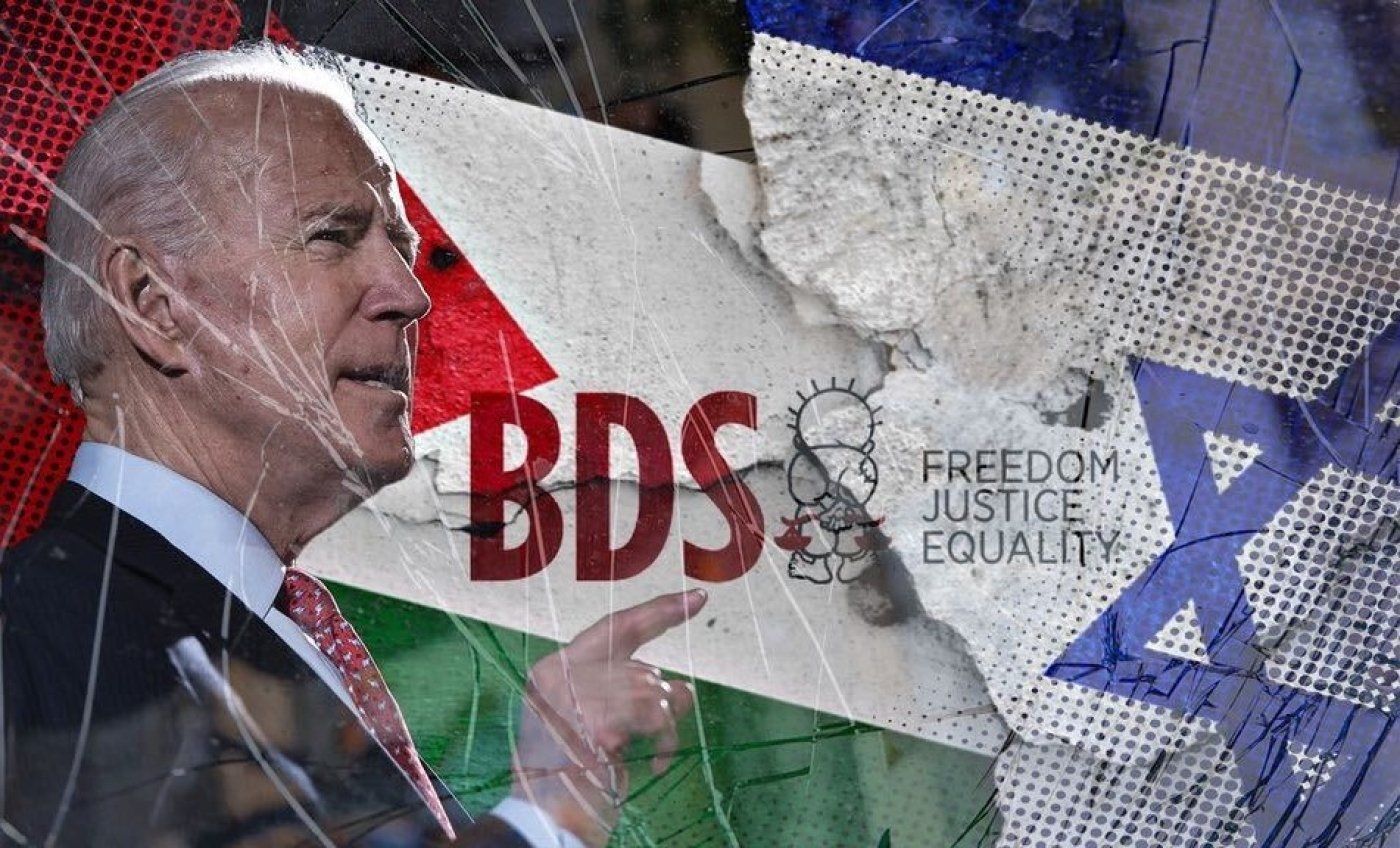 BDS 'veers into antisemitism, while letting Palestinians off the hook for their choices,' Biden's campaign says
By
Ali Harb
in
Washington

With Donald Trump and Joe Biden vying for the US presidency in November, Palestine solidarity activists say they are stuck between a rock and a hard place.

Trump's record on breaking international norms for the benefit of the right-wing Israeli government is well known.

Despite growing criticism of Israel within the base of the Democratic Party, Biden is adopting policies that would perpetuate the status quo of the occupation and oppression of Palestinians, activists say.

This month, the former vice president's campaign drew the ire of Palestinian human rights advocates with a string of statements, including ruling out conditioning aid to Israel, condemning the Boycott, Divestment and Sanctions (BDS) movement and demanding that Palestinians recognise Israel as a Jewish state.

"This amounts to a betrayal. The establishment of the party are effectively turning their backs on the base of the party that are demanding something better," Palestinian-American analyst Omar Baddar said of the recent pronouncements by Biden's campaign.

"It is just inexcusable at this point to merely be one shade to the left of Donald Trump, instead of being genuinely progressive on this issue.

"And the fact that Biden is content by just objecting to some of the more aggressive Trump policies, but to effectively repeat the same anti-Palestinian tropes is really disturbing, a troubling sign of the thinking inside the Biden campaign itself."

'Biden has been competing with Trump in terms of warmongering'

The former vice president has pledged to resume financial assistance to Palestinians that had been cut by Trump and to reestablish ties with the Palestinian Authority. At the same time, his campaign has repeatedly stressed its commitment to partnership with Israel, with one aide going so far as saying that Biden would not publicly air disagreements with Israel if elected president.

Moreover, the campaign released a statement detailing the presumptive Democratic nominee's plans for the Jewish-American community that focused on support for Israel.

The Biden administration will "firmly reject the BDS movement, which singles out Israel - home to millions of Jews - and too often veers into antisemitism, while letting Palestinians off the hook for their choices," the campaign said.

That stern line sparked outrage and accusations of victim-blaming against Biden. It also raised fears about free speech at a time when dozens of states have passed laws restricting the right to boycott Israel, several of which have been declared unconstitutional by federal courts.

"Blaming Palestinians for their own oppression is an anti-Palestinian talking point and there is never an excuse for such explicit racism, let alone as the Israeli government makes blatant and illegal land grabs,"  JVP Action, a political advocacy group affiliated with Jewish Voice for Peace, said in a statement on Thursday. For his part, Baddar highlighted what he called the absurdity of the rationale that BDS is antisemitic because it targets Israel.

"The argument from the Biden campaign that BDS veers into antisemitism because it singles out Israel is a really stupid charge," he told MEE.

"Palestinians are being oppressed and are having their basic rights denied by Israel, so obviously any campaign that is concerned with Palestinian rights is going to have to target Israel."

Earlier this week, top Biden adviser Tony Blinken also condemned BDS and pointed the finger at Palestinians, calling on them to recognise Israel as a Jewish state.

Biden himself reiterated that demand a day later. "They have to acknowledge flat out Israel's right to exist, period, as an independent Jewish state, and guarantee the borders," he said at a virtual fundraiser on Tuesday.

Tamara Kharroub, assistant executive director at the Arab Center Washington DC, said the demand to recognise Israel as a Jewish state by a US politician is a relatively new approach.

The Palestinian Liberation Organisation recognised Israel in 1988, but Palestinian leaders have refused to accept it as a Jewish state.

Kharroub said the demand is designed to perpetuate the "narrative of Palestinian rejectionism".

Kharroub said recognising Israel as a Jewish state would constitute a formal acceptance of "the second-class citizenship and discriminatory policies" against Israel's Muslim and Christian Palestinian citizens - who amount to more than 20 percent of the country's population. 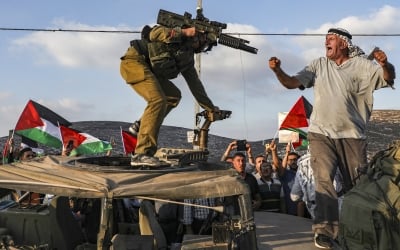 Such recognition would also practically surrender the internationally recognised right of return for millions of Palestinian refugees, she added.

Ariel Gold, national co-director of Code Pink, an anti-war feminist group, said asking Palestinians to recognise Israel as a Jewish state is akin to telling African Americans in the 1950s to recognise the United States as a white country.

"Israel is an apartheid state. And more and more American Jews say that an ethno-religious state - which is what by nature a Jewish state is - is incompatible with the Jewish values of freedom and equality," Gold, who is Jewish American, told MEE.

Biden's campaign did not respond to MEE's request for comment.

A rock and a hard place

Baddar said Palestinian Americans will be choosing between a Republican president openly waging an "all out war" on Palestinians and a Democratic candidate who stops short of that, but effectively enables Israel's war against them anyway.

"There's no question that the Palestinian rights movement in this particular election cycle is stuck between a rock and a hard place," he said.

On Thursday, JVP Action slammed Biden for ignoring Jews advocating for Palestinian rights in his plan for Jewish Americans.

"It’s a disservice to all Jews who value justice and equality that Biden continues to equate Jewish values with support for Israel," the group said.

Gold also decried the former vice president's focus on Israel in the plan, noting that the first line of sentence of the statement is about Israel, not American Jews. She compared it to Trump's referring to Israel's Benjamin Netanyahu as "your prime minister" to a Jewish-American audience last year. "Biden has been competing with Trump in terms of warmongering," she told MEE.

The Biden campaign's positions on the conflict appear to fall in line with his long history of pro-Israel advocacy since he was elected to the Senate in 1972. The former vice president took his first foreign trip as a US legislator to Israel and describes himself as a Zionist and "stalwart supporter" of the country.

But those views appear to be at odds with much of the Democratic base, including many Jewish Americans.

Last year, when Senator Bernie Sanders proposed conditioning aid to Israel at a conference for the liberal Jewish group J Street, the idea was met with applause.

"We've had enough racist and empty rhetoric," JVP Action said in its statement. "Biden is out of touch with the Democratic base, who increasingly believe we must stop funding Israeli oppression and pressure the Israeli government to end its systematic violations of Palestinian human rights."

Baddar said the shift in the Democratic base is real despite Biden's primary victory, and activists must maximise pressure on the Biden campaign to reflect it.

"More crucially, regardless of what the outcome of this election is, there's also a long game about shifting the public discourse further," he told MEE.

"Hopefully one day we will get to the point where we no longer have to face absolutely terrible choices for Palestinians." 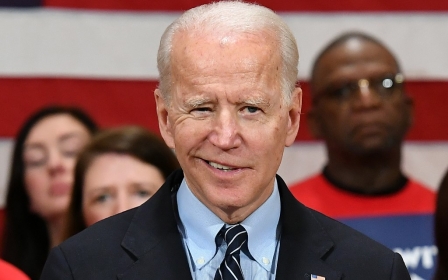