Bouteflika urges Algerians to vote as rivals warn of fraud

With a low turnout threatening the election's legitimacy, the incumbent says a failure to vote leaves Algerians "on the fringes of the nation" President Abdelaziz Bouteflika urged Algerians to defy boycott calls and vote in Thursday's election, as his rival Ali Benflis said an "army" of supporters would monitor the poll and warned against fraud.
The ailing 77-year-old incumbent is widely expected to clinch a fourth term in office, but he faces the damaging possibility of low voter turnout, with opposition parties and a youth protest group urging Algerians to snub the poll.
"I call on all citizens to participate in the presidential election and express their choice," Bouteflika said in a statement on Tuesday.
"Abstention, whether it comes from indifference or an unmotivated attitude, indicates an intention to remain on the fringes of the nation."
His message was carried by national media. The president has not appeared in public for months due to poor health that has prevented him from even taking to the campaign trail. Benflis, considered his main rival, has repeatedly warned of fraud during the election campaign, describing it as his "main adversary" in Thursday's vote.
Speaking to reporters in Algiers, he said he had an "army" of people in place to monitor the poll "consisting of 60,000 people, most of them young men and women armed to the teeth with conviction".
"If the election is rigged, I will not keep quiet," Benflis said.
"What will I do with these millions of people who have voted for me, if they realise that their votes have been rigged or tampered with?"
"Not to keep quiet means to protest, not to accept the will of the people being stolen," he added.
Rights concerns
Other opponents of the president also warned of electoral fraud, with Abderezak Mokri, who heads the Movement for the Society of Peace (MSP) - the Algerian branch of the Muslim Brotherhood - insisting Bouteflika could only win the election by rigging it.
"The signs of fraud are discernible," Mokri said, without elaborating. "The regime's candidate cannot win the election" without rigging it.
MSP and two other Islamist parties have forged an unlikely alliance with the fiercely secularist Rally for Culture and Democracy to call on voters to shun an election they say is a "sham".
Youth protest group Barakat (Enough), founded just two months ago specifically to oppose the president's bid for a fourth term, is also calling for a boycott.
Amnesty International has accused the Algerian authorities of silencing critics and stepping up curbs on freedom of expression in the run-up to the poll.
Reporters Without Borders on Tuesday criticised the authorities for restricting the freedom of journalists to report on the election.
The press watchdog said Algerian journalists had been arrested at protests when Bouteflika's intention to seek re-election was first announced, while some visas issued to foreign journalists had arrived very late and were heavily restrictive.
Others have yet to receive their visas despite applying far in advance, including an AFP journalist.
Fraud 'the enemy'
Bouteflika remains firm favourite despite serious doubts about his physical well-being, after he suffered a mini-stroke last year and spent nearly three months convalescing in a French hospital.
But Benflis said he was confident of "victory" on Thursday.
The former prime minister ran against and was heavily defeated by his former ally in 2004, alleging that Bouteflika's landslide victory then was rigged.
"Fraud has become an enemy for me and that's why I am condemning and fighting against it. Fraud is immoral and degrading, and dishonours all those who resort to it," Benflis said.
Benflis and Bouteflika have waged a war of words in recent days, the president accusing his rival of inciting violence, sedition and even "terrorism via the television", in reference to his warnings of electoral fraud.
Benflis branded the charges "irresponsible".
"These accusations reflect the state of panic and the disarray that has gripped those who made them," he said.
Legitimacy
Some observers, however, see that the election process is intended to give legitimacy to an undemocratic regime.
“The Algerian elections are not meant to facilitate a change of leadership through voting, but are merely a vehicle to give some token electoral ‘legitimacy’ to the regime’s candidate,” wrote Frédéric Volpi, a senior lecturer at the University of St Andrews, in an article published by the Middle East Institute.
His views are shared by Peter Pham, the director of the Atlantic Council Africa Center.
"We're not talking about a democratic process.  We are talking about the re-election, in quotes, of a boycotted poll of a man who has been president for nearly two decades and who is too sick to even campaign for himself.  So, expecting democratic transformation out of this is, at best, wishful thinking," Pham told VOA.
However, Algeria’s Ahmed Ouyahia, a three-time former premier and current chief of staff insisted that the majority of Algerians truly back Bouteflika.
“Bouteflika is the most appropriate choice to gather the Algerian people in a national consensus. A large majority of the nation backs him,” he told the New York Times. 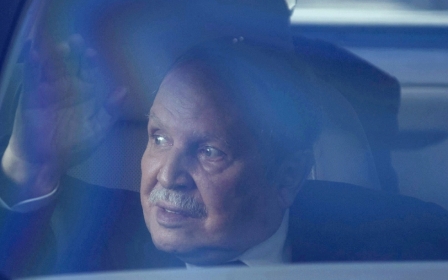