Egypt: 49 executions carried out over 10 days in October Egyptian authorities executed 49 people between 3 and 13 October, according to a report released by Human Rights Watch.

According to the report, 15 men were executed for their alleged involvement in cases of political violence, and the other 32 men and two women had been convicted in criminal cases.

The international organisation stated that 15 people were executed on 3 October alone. Ten of those executed had been convicted in the Ajnad Misr (Soldiers of Egypt) case, where authorities charged defendants with involvement in armed attacks by Ajnad Misr, a group which claimed responsibility for several assaults that took place in South Giza in 2014 and 2015.

Three of the executions were related to the Kerdasa case, where Major General Nabil Farag, a senior interior ministry official, was shot dead by gunmen during a security raid on the town of Kerdasa in September 2013 after clashes had erupted in the aftermath of the ousting of President Mohamed Morsi.

Two of the executions were linked to the East Alexandria case of 2013, in which authorities charged 71 people following violent protests near the library, where 16 people were killed.

On 13 October, reports in the Egyptian media also published the names of eight prisoners who had been executed in the maximum security prison in the Minya governorate, south of Cairo.

Pro-government media stated that 11 executions were carried out on 6 October, in Cairo’s Istinaf Prison.

Reports also stated that eight prisoners had been executed on 3 October and another seven on 8 October, related to rape and murder cases.

A spokesperson for We Record, an organisation tracking and documenting the death penalty in Egypt, told MEE earlier this month that the executions had been “unlawful”, since most of the detainees had been subjected to enforced disappearance and torture prior to their conviction.

Joe Stork, the deputy Middle East and North Africa director at Human Rights Watch, called the executions and trials a violation of the right to life.

'The systematic absence of fair trials in Egypt, especially in political cases, makes every death sentence a violation of the right to life'

“Egypt’s mass executions of scores of people in a matter of days is outrageous… the systematic absence of fair trials in Egypt, especially in political cases, makes every death sentence a violation of the right to life.”

The report also stated that under Egypt’s President Abdel Fattah el-Sisi, Egypt had become one of the top 10 countries in the world for executions and death sentences.

"Those arrested for alleged political violence frequently face a host of abuses including forced disappearances, torture to extract confessions and no access to lawyers," the report stated.

Earlier this week, over 200 European lawmakers sent a letter to Sisi, publicly denouncing his government’s continued human rights abuses as a threat to the country's security and stability.

The letter, a copy of which was sent to Middle East Eye, also urged Sisi to release human rights defenders held in pre-trial detention, particularly with the risks to health associated with the Covid-19 pandemic.

Human Rights Watch has repeatedly called for authorities to halt executions and unfair trials, where they say authorities routinely round up groups of defendants without justification, and carry out mass trials where people do not have enough time to present a defence.

Human rights groups estimate that there are around 60,000 political detainees in Egypt, including journalists, bloggers, political dissidents, lawyers and activists. 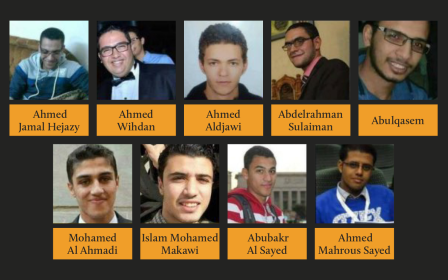