People react outside Stockholm District Court on 14 July 2022, after the life sentence in the war crime trial against Hamid Noury was announced (AFP)
By
MEE and agencies

Iran said on Saturday that it had arrested a Swedish citizen on espionage charges, the official IRNA news agency reported, after a court in Stockholm sentenced a former Iranian official for war crimes earlier this month.

Iran has arrested dozens of foreigners and dual-nationals in recent years, mostly on espionage and security-related accusations. Rights groups call that a tactic to win concessions from abroad by inventing charges, which Tehran denies.

It did not give a name or say when the arrest was made, but added that the suspect had a history of going to the Palestinian territories, went to non-tourist destinations in Iran, and contacted people, including Europeans, under surveillance.

The intelligence ministry statement accused Sweden of "proxy spying" on behalf of Iran's arch-foe Israel, which it said would draw a "proportional reaction" from Iran.

Sweden's foreign ministry said it was aware of the case.

A spokesperson said the case was that of a Swedish man whom the foreign ministry had said in May had been detained in Iran. Tehran did not report that arrest at that time.

Relations between Sweden and Iran have been difficult since Sweden detained and put on trial a former Iranian official on charges of war crimes for the mass execution and torture of political prisoners at an Iranian prison in the 1980s.

On 14 July, a Swedish court sentenced the man, Hamid Noury, to life in prison. Iran condemned the case as politically motivated.

Among other foreigners and dual-nationals currently held in Iran are Ahmadreza Djalali, a Swedish-Iranian researcher sentenced to death on charges of spying for Israel.

Djalali was arrested in Iran on suspicion of espionage in 2016. In May, the judiciary ruled out any exchange between Djalali and Noury.

"Djalali has been sentenced to death on several charges and the verdict is final. The sentence will be carried out," spokesperson Zabihollah Khodaian said, speaking at a press conference in Tehran.

The two files "have nothing to do with each other... therefore, there is no question of an exchange".

He did not say when the execution would take place.

Last week, a British campaigner imprisoned in Iran was temporarily released with an electronic tag, the UK government confirmed.

"Morad is a tri-national and we continue to work closely with the United States to urge the Iranian authorities to permanently release him and allow his departure from Iran," it added in a statement.

Tahbaz was detained by Iran in 2018 alongside several other wildlife conservationists who were accused of spying.

In March, he was briefly furloughed as part of the deal that saw fellow British detainees Nazanin Zaghari-Ratcliffe and Anoosheh Ashoori fly home to the UK.

The deal also saw the UK settle a £400m ($481m) historic debt for the non-delivery of Chieftain tanks to Tehran, which had been cancelled following the 1979 Islamic revolution. 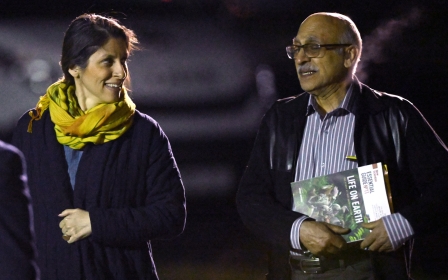