Cabinet backs PM's proposal to turn unsanctioned outpost into formal settlement, 20 years after it was established as farming community in Jordan Valley Israeli Prime Minister Benjamin Netanyahu stepped up his bid for far-right votes two days before a closely contested election, convening his cabinet in the occupied West Bank and having it approve legal status for an unauthorised outpost.

Netanyahu's caretaker government met on Sunday in the Jordan Valley, a largely agricultural area that he said last week he intends to annex if he wins a fifth term. Israeli cabinets have rarely held sessions in the occupied West Bank, Reuters said.

At the meeting, the government announced it had approved Netanyahu's proposal to turn the outpost of Mevoot Yericho into a formal settlement, 20 years after it was established as a farming community in the Jordan Valley without state sanction.

All settlements are viewed as illegal under international law, but Israel distinguishes between those it has approved and those it has not. About 30 families live in the outpost.

The approval came as Netanyahu and his main opponent Benny Gantz vied to mobilise supporters. Netanyahu has made a flurry of announcements in recent days as part of his efforts to continue his reign as Israel's longest-serving prime minister, AFP said.

Last week, Netanyahu also announced he intended to approve the outpost's legalisation, but was later informed by Attorney General Avichai Mendelblit that it could not be done with a transitional government, Haaretz reported.

In public remarks at the session, Netanyahu said it would, therefore, be up to the government formed after Tuesday's election to grant final approval.

The timing of the cabinet's move was widely seen in Israel as another bid by Netanyahu to swing support from small ultra-nationalist parties to his right-wing Likud in an election that follows an inconclusive poll in April. "The Palestinian people are the only decision-makers on their land," said Nabil Abu Rudeineh, a spokesman for Palestinian President Mahmoud Abbas.

Rudeineh dismissed the entire cabinet meeting as illegal and called on the international community to "stop the Israeli madness aimed at destroying all the foundations of the political process".

Appealing to far-right voters and Likud's own supporters to turn out in large numbers, Netanyahu has been portraying himself as being in lockstep with ultra-nationalists over keeping occupied West Bank land through annexation.

Ballots cast for far-right parties, rather than for Likud, he has said, could deny it victory in a close race. In Israel, voters choose a party's list of parliamentary candidates, rather than individuals.

Scores of outposts, unauthorised by Israeli governments, dot the occupied West Bank, in addition to about 120 settlements that have been built in the area since its capture in the 1967 Middle East war.

Israeli settlers regularly set up caravan homes at sites in the occupied West Bank with the hope of eventually gaining government approval as a settlement, which has repeatedly occurred.

The Palestinians and many countries consider all Israeli settlements in the West Bank to be illegal under the Geneva Conventions relating to occupied territory. Israel disputes this, citing security needs and biblical, historical and political connections to the land.

Palestinians seek a state in the West Bank and the Gaza Strip, with East Jerusalem as its capital. 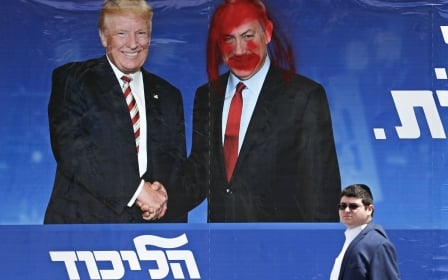