The US State Department denounced the International Criminal Court's investigation into alleged Israeli abuses, arguing that Palestine is not a state 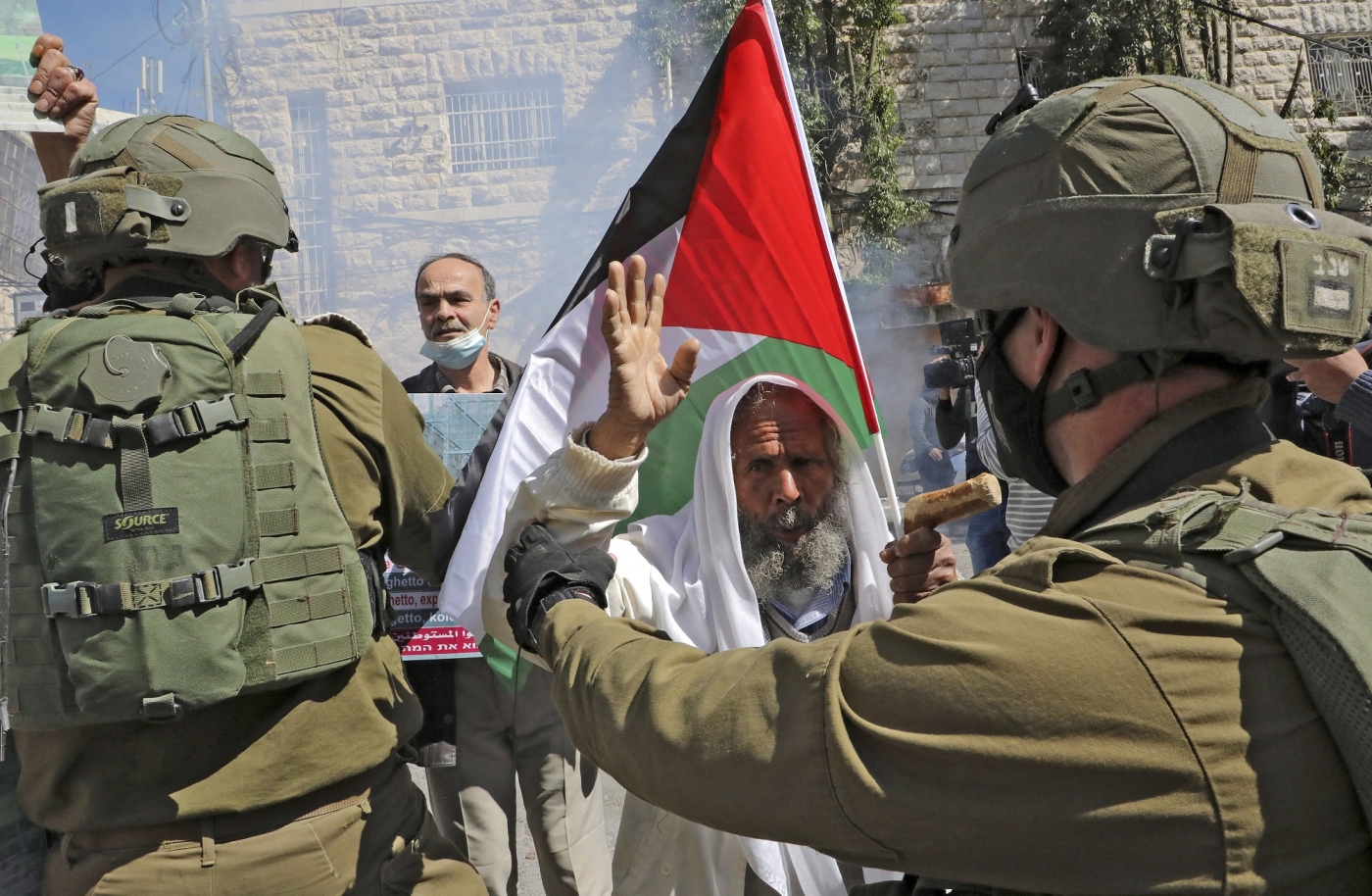 Israeli forces block Palestinian protesters during a demonstration in the occupied West Bank city of Hebron, 26 February (AFP)
By
Ali Harb
in
Washington

After denouncing the International Criminal Court's probe into alleged Israeli war crimes in the occupied Palestinian territories, US Department of State spokesman Ned Price struggled to answer a question over where Palestinians should seek accountability for abuses carried out by Israel.

"The United States is always going to stand up for human rights," Price said at a media briefing on Wednesday, before pivoting to a familiar declaration of Washington's support for the two-state solution.

The query went unanswered as Price moved on to another subject.

The question, rights advocates say, is of tremendous importance. The new US administration has condemned all measures of Palestinian resistance, including the peaceful Boycott, Divestment and Sanctions (BDS) movement as well as efforts to secure justice at international forums including the ICC and the United Nations.

Jonathan Kuttab, a Palestinian-American lawyer specialising in international law, said the administration was not merely questioning the methods Palestinians were using to fight for their rights; it was implying that Palestinians don't have any rights at all.

"They can't use armed struggle obviously; they call that terrorism. They can't use BDS and nonviolent methods because that's somehow not good," Kuttab told MEE.

The office of ICC prosecutor Fatou Bensouda announced on Wednesday that the court will proceed with a probe into possible abuses committed in the Palestinian territories since 2014.

The investigation will cover alleged war crimes both by Israeli forces and Hamas during the conflict in Gaza and Israel's settlement activity in the West Bank, including East Jerusalem. The court opens investigations in places where the domestic authorities are unable or unwilling to look into allegations of abuse.

The Israeli government was quick to condemn the decision, and Prime Minister Benjamin Netanyahu accused the court of antisemitism. Palestinians, including Hamas, welcomed the probe, with the group saying it was ready to defend its "legitimate resistance".

After the press briefing on Wednesday, the State Department issued a strongly worded statement, saying Washington was "deeply disappointed" in the court's decision.

The US administration argued the ICC has no jurisdiction over the Palestinian territories, because Israel is not a party to the Rome Statute that formed the court - and Palestinians do not have a state.

"The Palestinians do not qualify as a sovereign state and therefore are not qualified to obtain membership as a state in, participate as a state in, or delegate jurisdiction to the ICC," the statement said, avoiding mentioning the word "Palestine".

It went on to reaffirm Washington's "strong commitment to Israel and its security, including by opposing actions that seek to target Israel unfairly".

The United States firmly opposes an @IntlCrimCourt investigation into the Palestinian Situation. We will continue to uphold our strong commitment to Israel and its security, including by opposing actions that seek to target Israel unfairly.

Blinken's post was met with outrage from Palestinian rights advocates.

"The audacity of trying to deprive the Palestinian people of legal recourse and international protection is sickening," Zeina Ashrawi Hutchison, a Palestinian-American activist, told MEE.

"The arrogance of trying to bully and intimidate the international justice system to shield Israel from even an investigation is appalling. Doing both while speaking and acting on my behalf as an American is outrageous."

Critics also pointed out that far from singling out Israel, the court has 14 ongoing investigations, nine of which are in Africa.

'International law is nothing if it doesn't apply to everybody'

Congresswoman Rashida Tlaib said Washington should not impede the court's efforts to investigate and deliver justice for victims of human rights violations in Israel and Palestine. "No one is above the law," she tweeted in response to Blinken.

Khaled Elgindy, director of the programme on Palestine and Palestinian-Israeli affairs at the Middle East Institute, said the State Department's statement showed that Washington benefited from suppressing Palestinian statehood.

"Based on this framing it's feasible to conclude that the US not only doesn't recognize Palestinian statehood but has an active interest in preventing that outcome in the future," Elgindy wrote on Twitter.

"In other words, ICC involvement creates a disincentive for the US to work toward a Palestinian state."

Yara M Asi, a non-resident fellow at the Arab Center Washington DC, said if Blinken did not believe Palestine was a state, he should press Israel to fulfill its duties as the occupying power of the Palestinian territories.

"Palestine is not a sovereign state, so not able to engage in legal forum questioning the occupation," Asi tweeted.

"I look forward to his statement calling on Israel to thus adhere to its responsibilities as an occupying power, including vaccinating the 5 million Palestinians under its control."

On the legal front, Kuttab said the question of Palestinian statehood was merely a technical hurdle that the Israeli and American governments cite to "foreclose the discussion" because it was a "slam dunk" to prove Israeli war crimes.

"The settlements are clearly illegal. There's no question. Any international forum that looks at the facts - the Israelis are guilty of a grave breach of the Geneva Convention, of war crimes and crimes against humanity," Kuttab told MEE.

The Fourth Geneva Convention explicitly states the occupying power cannot "deport or transfer parts of its own civilian population into the territory it occupies".

Despite not being recognised as a state by Washington, Palestine is party to many international organisations, including the UN cultural body, Unesco. In 2012, Palestine also gained non-member observer state status at the UN General Assembly.

Kuttab stressed that the ICC did have jurisdiction over the Palestinian territories. "You can't say that you can get away with murder just because there is no state where the murder occurred," he said.

The Biden administration's criticism of the ICC comes as the new US president and his top aides are yet to criticise the Israeli policies of occupation and settlement.

President Joe Biden had promised to reverse some of the policies of his predecessor, Donald Trump, including resuming the delivery of aid for Palestinians.

But he has refused to move the US embassy from Jerusalem back to Tel Aviv or to undo US recognition of Israel's claims to Syria's occupied Golan Heights.

"International law is nothing if it doesn't apply to everybody - friends and foes alike," Kuttab said. 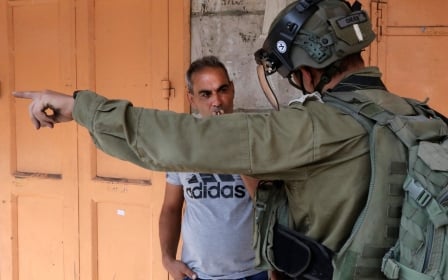 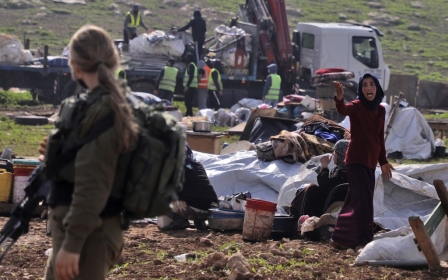