Aramco will sell 0.5 percent of its shares to individual retail investors and government will have lockup period of a year on further share sales after IPO, its prospectus says Amin Nasser, president and CEO of Aramco, left, and Yasser al-Rumayyan, chairman, at news conference in Dhahran, Saudi Arabia, on 3 November (Reuters)
By
MEE and agencies

Saudi state oil giant Aramco will sell 0.5 percent of its shares to individual retail investors and the government will have a lockup period of a year on further share sales after the initial public offering (IPO), its prospectus said on Saturday.

The more than 600-page prospectus did not include details of how much of the company would be floated in total or of any commitments from anchor investors, Reuters said. Sources have said the company may sell 1-2 percent on the Saudi stock market in what could be the world's biggest listing.

The prospectus said the offering period will start on 17 November and end on 28 November for individual investors and on 4 December for institutional investors. The company will announce a final price for its shares on 5 December, with trading expected to start in mid-December, the New York Times said. Aramco also said it will determine the percentage to be sold to institutional investors after consultations with its financial advisers and global coordinators, according to AFP.

Aramco fired the starting gun on the initial public offering on 3 November after a series of false starts. Crown Prince Mohammed bin Salman (MBS) is seeking to raise billions of dollars to diversify the Saudi economy away from oil by investing in non-energy industries. 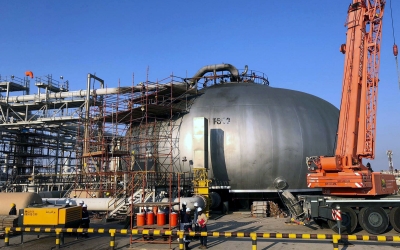 Saudi Arabia has huge oil reserves of more than 260 billion barrels. The kingdom is one of the top producers and exporters of petroleum globally, and owns about 18 percent of the world’s proven petroleum reserves. The oil and gas sector comprises half the country’s gross domestic product and 70 percent of its export earnings, according to CNBC.

Among the risks highlighted in the prospectus were the potential for attacks and the potential for encountering antitrust legislation, as well as the right of the Saudi government to decide maximum crude output and direct Aramco to undertake projects outside its core business.

Aramco's oil facilities were targeted on 14 September in unprecedented attacks that temporarily shut 5.7 million barrels per day of output - more than 5 percent of global oil supply.

Aramco may also change its dividend policy without prior notice to its minority shareholders, it said.

There are concerns about the extent to which the interests of new investors in the company will be protected, the NYT said. With only a small percentage of the company’s shares likely to be publicly traded, the Saudi government will remain by far the largest shareholder and, analysts say, can largely do as it wishes with an organisation that generates much of the government’s revenue.

The prospectus said the government will have a "statutory lockup period" for disposing of any shares after the listing for six months, and a contractual lockup period for 12 months. Aramco has been in talks with Gulf and Asian sovereign wealth funds and wealthy Saudi individuals to secure top investors of the IPO, but no anchor investor has yet formally agreed to a deal.

Bankers have told the Saudi government that investors will likely value the company at around $1.5 trillion, below the $2 trillion valuation touted by MBS when he first floated the idea of an IPO almost four years ago.

At a valuation of $2 trillion, Aramco could potentially raise $40bn, topping the record-breaking $25bn raised by Chinese e-commerce giant Alibaba in 2014.

The valuation would be almost twice that of Microsoft, currently the world's most valuable listed company, and seven times that of Exxon Mobil, the biggest listed oil major by market capitalisation.

"Due to its size and likely free float, Aramco should be eligible for fast-track inclusion in both the FTSE and MSCI Emerging Market indices within 10 days of the IPO," said Dominic Bokor-Ingram, senior portfolio manager, frontier markets, of Fiera Capital (Europe).