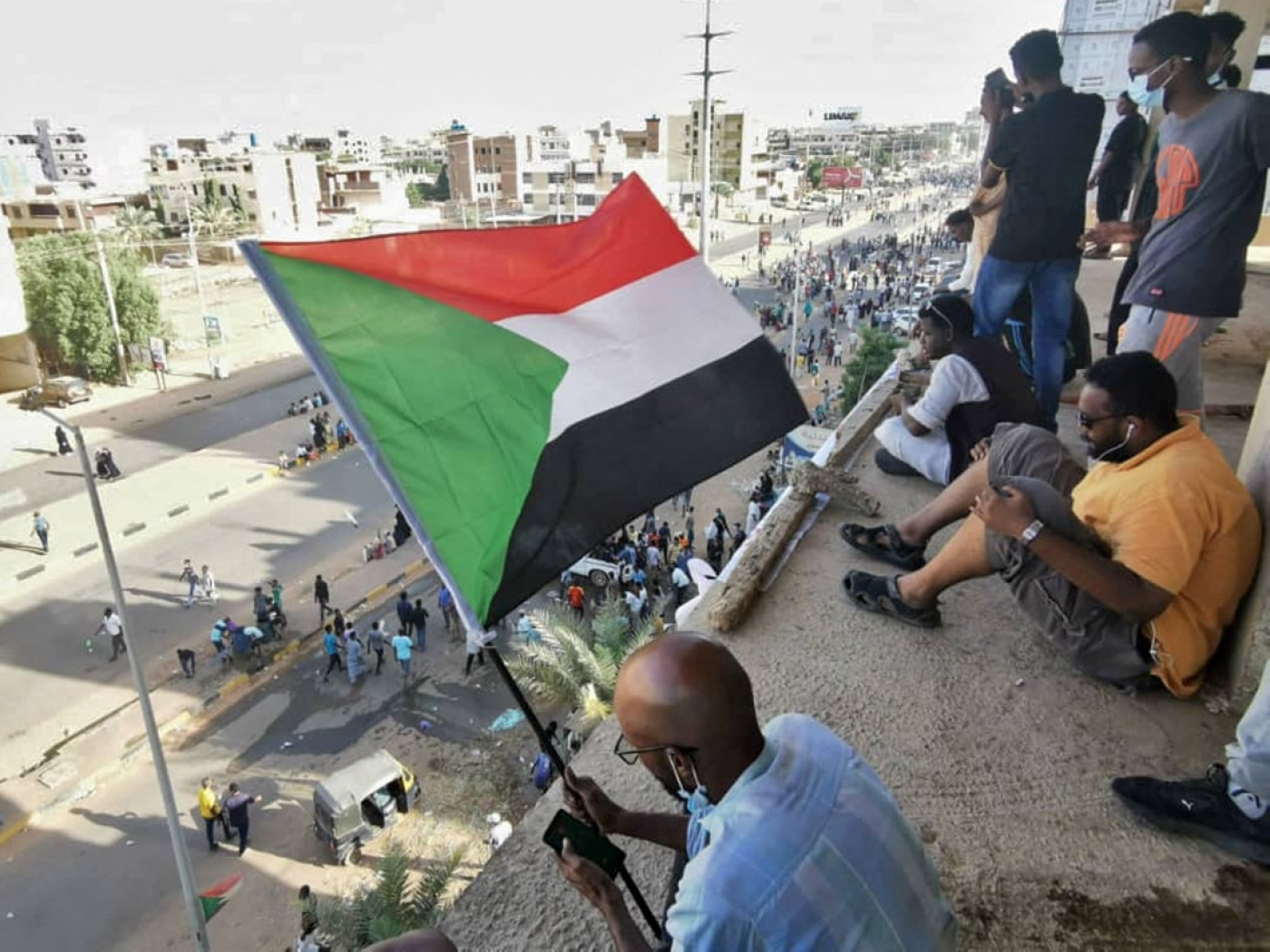 Sudanese anti-coup protesters gather in the capital Khartoum on 30 October 2021 to express their support for the country's democratic transition, which a military takeover and deadly crackdown derailed (AFP)
By
Mohammed Amin
, Frank Andrews

Sudanese security forces fired live rounds and tear gas at protesters during mass anti-coup rallies across Sudan on Saturday, killing three and wounding at least 100 in the so-called "March of Millions" against military rule.

Three demonstrators were killed in Omdurman, Khartoum's sister city, the Sudan doctors' committee said, adding that one was shot in the head, one in the chest and the other in the stomach.

Forces "have fired live rounds at protesters in Omdurman and other areas in the capital", the committee said.

Other reports emerged later in the day that security forces were storming a hospital in the nation's capital.

The latest killings bring the death toll since the outbreak of anti-coup protests on Monday to 12.

Saturday's protests, joined by hundreds of thousands of people, came almost a week after the military on Monday detained Sudan's civilian leadership, dissolved the government and declared a state of emergency, triggering a chorus of international condemnation.

'We are free revolutionaries'

The picture of exactly how Saturday unfolded remains unclear, with internet restrictions hampering activists' ability to post videos and photos online of the authorities' crackdown.

Despite the deaths over the past week, protesters took to the streets defiantly across the country on Saturday to march against the military's power grab, in mass protests similar to those that led to the toppling of autocrat Omar al-Bashir in 2019.

In Khartoum, where there was a heavy police presence, protesters shouted: "We are revolutionaries, we are free, and we will go the distance."

"The will is incredible," Mai, a civil activist and business owner, told MEE over the phone as she drove towards a protest in the capital. "We’ve all been soaking up this resistance and, inshallah, today we will show them what they need to see and hear, which is basically, never, ever, ever again.”

With the internet restricted, here's a few videos that have emerged. #السودان pic.twitter.com/IsKMfM3Rde

But she was wary of security forces and had left her children at home. "We don’t trust them at all. I’m looking up at these buildings and I’m thinking to myself there could be snipers at any point, pointing towards us… anything can happen. They’ve done it before and they can do it again. And if you corner them, they will do it. They have everything to lose.”

Her suspicion was soon proven well-founded. She left the scene of the protests just as it reportedly turned violent.

Photos widely shared on the internet showed bloodied men in hospital beds bearing what appeared to be bullet wounds.

Outside of Omdurman and Khartoum, eyewitnesses told MEE that armed clashes had erupted in the coastal city of Port Sudan between pro-democracy protesters and pro-military demonstrators headed by tribal leader Mohamed al-Amin Tirik.

“Followers of Tirik have attacked pro-democracy protesters in the market of Port Sudan city,” one witness told MEE. “They used knives and swords to scare the protesters, but the police separated the two groups.”

An activist based in al-Fashir, the capital of North Darfur, told MEE that around 20 protesters were arrested there.

But protesters told MEE that they remain committed to seeing through the revolution.

It also emerged on Saturday that Sudan's minister of cabinet affairs, Khalid Omer Yousif, who was detained on Monday then sacked, has been admitted to hospital, claiming that he has been tortured, according to a medical source.

The cabinet affairs ministry said that on Wednesday the minister was brutally tortured by those who arrested him.

“Yousif was admitted to the intensive care unit in the military hospital on Wednesday and his situation is critical,” said the source, who asked not to be named for security reasons.

MEE couldn’t independently confirm the allegations and its calls to an army spokesman were not answered.

Sudan had been led since August 2019 by a civilian-military ruling council, which was supposed to last three years and lead to full civilian rule.

The arrangement came under increasing strain prior to the coup, which analysts said aimed to maintain the army's traditional control over the country.

"Though I have reservations on the performance of Hamdok's government, there is no substitute for it," said protester Hagar Youssef, from east Khartoum. "Sudan has had enough of military rule." 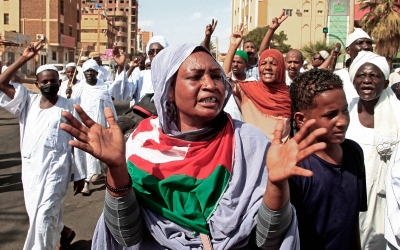 Protesters held posters of Prime Minister Abdalla Hamdok, ousted by the military and effectively held under house arrest, with slogans saying: "Don't back down."

In east Khartoum, protesters burned tyres and held posters reading "It's impossible to go back", while in the city's southern district banners expressed concern that the country might return to Washington's state sponsors of terrorism list.

That designation, accompanied by years of crippling sanctions, was lifted only last December, opening the way to debt relief and renewed largesse from the International Monetary Fund and World Bank.

After the coup, the World Bank suspended aid to Sudan in a heavy blow to a country already mired in a dire economic crisis that began under Bashir.

Other protesters called for "freedom to the members of cabinet" who have been detained since the putsch.

Several pro-democracy activists have also been arrested following the takeover, led by General Abdel Fattah al-Burhan, Sudan's de facto leader since the removal of Bashir which came at the cost of more than 250 lives.

Burhan, a senior general under Bashir's three decades of iron-fisted rule, has insisted the military takeover "was not a coup" but only meant to "rectify the course of the Sudanese transition".

Officials from the United Nations, the US and Britain have urged security forces to refrain from violence and show "restraint".

"The security services and their leaders will bear responsibility for any violence towards any protesters," said Robert Fairweather, Britain's special envoy for Sudan and South Sudan.

Security forces had deployed in large numbers and blocked bridges connecting Khartoum with its sister cities.

Before the protests began, Sudan's information ministry, which backs a civilian government, warned that coup authorities were planning to engineer "instances of destruction to justify its excessive violence".

Protesters during the week had, in some cases, already been met with tear gas, rubber-coated bullets and live rounds.

Shops have largely been shuttered, and government employees have refused to work as part of a campaign of civil disobedience.

As tens of thousands of Sudanese took to the streets across the country to denounce the military coup, members of the diaspora and other supporters of the pro-democracy movement staged solidarity protests across the world on Saturday.

Protests were reported to have taken place in Australia, Libya and Lebanon, as well as across Europe.

International solidarity protests with Sudan’s anti-coup demonstrations were staged across the world on Saturday.

Tens of thousands of Sudanese have taken to the streets across #Sudan to denounce the recent military coup. #السودان pic.twitter.com/RoQEutc2Cv

Casualty counts from Saturday's protests, and the past week, are likely to rise as and when internet restrictions loosen.

“Once the internet is back on the world is going to be shocked by what’s been happening," civic activist Mai told MEE from Khartoum.

"We don’t even know half of what’s been happening around the city. There have been deaths, and there’s been shooting straight at young men and women in neighbourhoods. But we can’t verify because we don’t have internet access, access to sources who can confirm or deny this.

"And the fear is that today will be worse, especially if the world is not watching.” 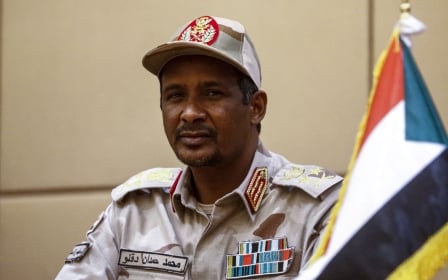 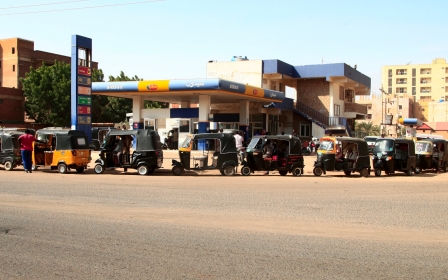 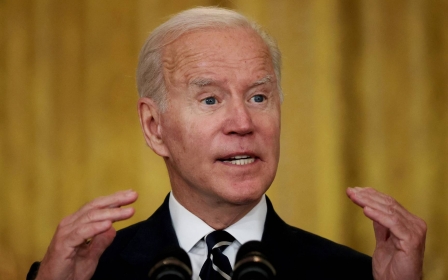