The Delta variant is spreading in the rebel-held province, with hospitals forced to turn away patients

Cases of Covid-19 have spiked in rebel-held northwestern Syria over the past month, as health workers warn that the Delta variant is spreading fast with few preventive measures in place to stem the spread.

Most new cases have been concentrated in the cities of Salqin and Harem, in the western Idlib province, where the number of reported cases has multiplied by 14 in a month, according to local medical organisations.

On Friday, the Assistance Coordination Unit, a medical NGO monitoring coronavirus cases, reported 1,417 new cases. This is a record in the region, which has a population of around four million people, many of whom have been internally displaced by the decade-long war.

Cases have been reported in children as young as three years old and patients are overwhelming Covid-19 wards.

“Cases are increasing, deaths happen daily, and some cases are young. Most of the cases are unvaccinated,” Farouk Kishkish, a medical director for Salqin Hospital, told Middle East Eye.

Delta variant on the rise

Salqin Hospital, which is funded by the Syrian American Medical Society, has been struggling to keep up with the rise in Covid-19 patients filling its 30-bed intensive care unit, the hospital’s director Issa Qassem told MEE.

“Often, we have to stop receiving patients until another case recovers and comes out,” Qassem said. “Most hospitals around us are operating at capacity. Other centres or hospitals for treating Covid must be prepared as soon as possible.”

Most new cases reported in Idlib have the Delta variant, which is more contagious than the original strain of the virus.

“The incidence rate of Covid-19 in northwest Syria has been increasing since the beginning of August, following an increase in cross-border movement after the Eid holidays at the end of July,” The World Health Organisation (WHO) told MEE, adding that new daily cases have surpassed 1,000 in the area since the last week of August. 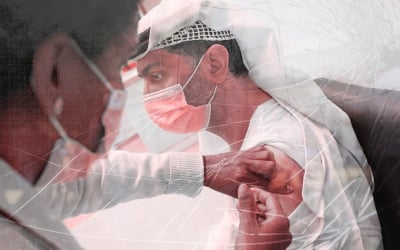 The Idlib province, which has been under opposition control since 2015, faces major challenges as many hospitals and health facilities have been damaged by attacks.

In June, a hospital in the city of Afrin was targeted, killing at least 18 people, including four hospital employees.

In March, a pro-government attack put the Atareb hospital, which served the entire rural population of western Aleppo - around 120,000 people - out of service.

Meanwhile, nearly a million internally displaced people (IDPs) live in crowded camps near the Syrian-Turkish border in northern Idlib that lack basic services, including water, adding to the pressure on measures to limit the spread of Covid-19.

As a result, between 40 and 50 percent of PCR tests administered in the area have come back positive since mid-August, WHO told MEE.

Turkey, which backs the rebels, and Russia, an Assad ally, have been overseeing a ceasefire agreement in northwestern Syria since March 2020 after violence displaced one million people in Idlib.

The province is largely run by an alliance of militant groups, including Hayat Tahrir al-Sham, supporting a local authority known as the Salvation Government.

Mulham al-Ahmad, a spokesperson of the Salvation Government, told MEE that there was no plan to instate lockdowns in the cities most affected by the surge of Delta cases, as was done in the city of Sarmin in eastern Idlib late last year.

Ahmad did not elaborate on the decision to forgo a lockdown, nor did he detail any measures to slow the spread of the pandemic in Idlib.

The lack of measures has angered a number of residents, as videos of local events where hundreds of people gathered without social distancing or masks have circulated on social media.

“There are no official preventive measures between individuals in society - most of the measures are only in medical centres,” Aisha al-Muhammad, a civilian living in the city of Idlib told MEE. “There are no physical distancing measures in mosques, markets and restaurants. Public occasions are still ongoing.”

Rama Saifo, another young woman living in Idlib, said a lack of information, as well as widespread poverty, affected the application of some measures.

“Awareness campaigns are limited to some organisations’ Facebook posts,” she told MEE. “The situation of most people, including the displaced, is difficult, so many avoid buying masks.”

For Saifo and many other civilians in northern Syria, the best solution to the ongoing crisis is the vaccine.

On Friday, Unicef and the Syrian Immunisation Group received 358,000 vaccine doses through the Covax programme, which secures vaccines for poor countries.

Like the 41 vaccine centres in northern Syria, Idlib University Hospital vaccinates dozens of people every day.

"We are seeking to vaccinate at least 800,000 civilians by the end of this year," Hossam Mohammed, the doctor who spearheads the Covid-19 response at the Idlib Health Directorate told MEE.

While medical staff and other workers deemed essential were first in line to receive the vaccine, Mohammed said jabs were now given to people with chronic illnesses or otherwise compromised immune systems as a priority.

"So far, more than 100,000 vaccine doses have been administered, and there is a large turnout of civilians," he added.

The slow pace of vaccination, however, has many worried that the recent spike in cases will only further grow in the coming weeks. 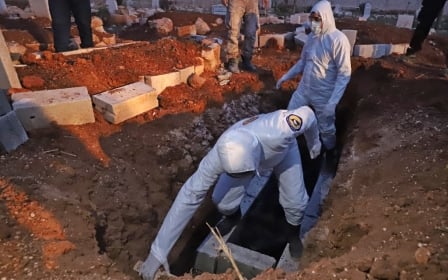 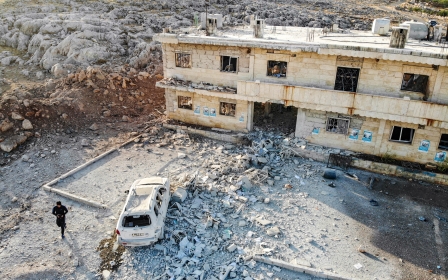 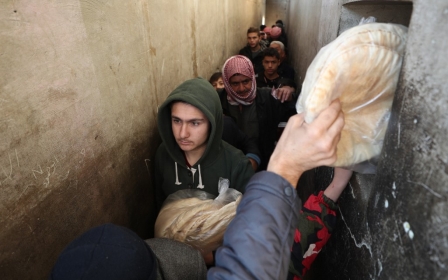 Syria War
'Only the basics': In Syria everyday staples have become luxury expenses