Syrians react furiously to Turkey's call for reconciliation with Assad 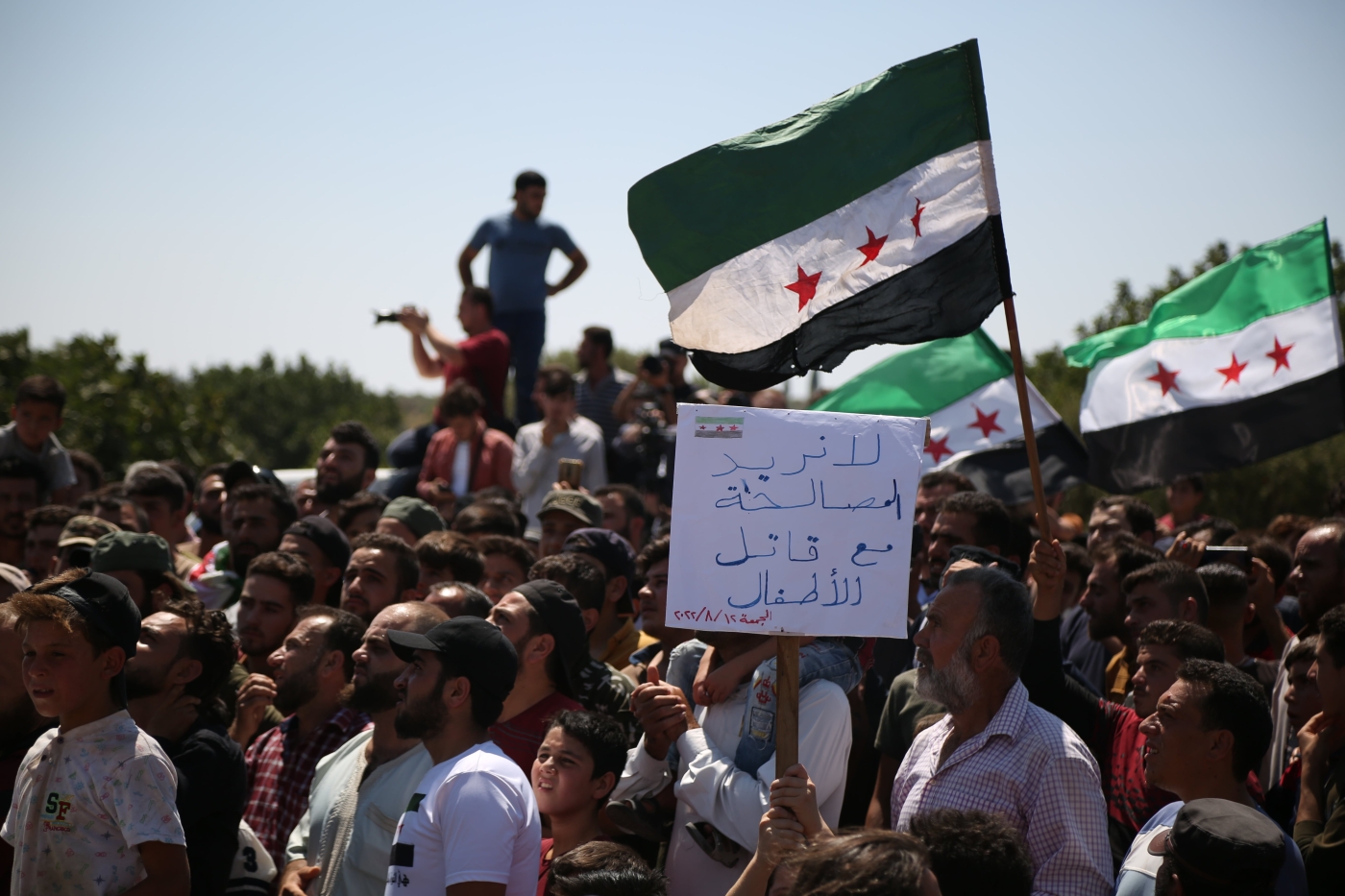 A protest by Syrians in the al-Mastumah area of north Syria's Idlib Province, near a Turkish base, on 11 August 2022 (MEE/Bilal Hammoud)

Mass demonstrations erupted in northwestern Syria on Thursday and Friday after Turkish Foreign Minister Mevlut Cavusoglu called for reconciliation between Syria's opposition and the government of President Bashar al-Assad.

Cavusoglu raised eyebrows during a news conference on Thursday in which he said that he met his Syrian counterpart in October and that the intelligence services of the two countries have resumed diplomatic contacts to discuss sensitive issues.

Diplomatic contacts between the two countries had been severed since 2012 over Assad's mass killings of Syrian protesters and civilians following their uprising against him.

Demonstrations have been concentrated in northwest Syria's Idlib city and areas under Turkish control north of Aleppo, in the cities of al-Bab, Azaz, Marea, Jarablus and Sajo, as well as other locations.

"We are completely against Turkey's calls, and against any parties in the opposition who want to reconcile with Assad," Bashar al-Hassan, a civilian demonstrating near a Turkish military base in the town of al-Mastumah, south of Idlib, told Middle East Eye.

"We have lost thousands of martyrs, and half of the Syrian people are displaced. We refuse to reconcile with Assad, who bombed us with chemical weapons and warplanes, and killed children. We will continue to demand the overthrow of the Syrian regime even to the last day of our lives," he said.

The demonstrators demanded the exit of Turkish troops from Syria, and burned Turkish flags on Thursday night in the city of Azaz, one of Turkey's largest strongholds in northern Syria.

Some 15 civil society groups based in northern Syria issued statements of condemnation, though the Syrian political opposition, which is based in Turkey, praised Turkey's role in supporting the revolution against Assad.

The Turkish-backed Syrian National Army grouping of rebel factions said reconciliation with Assad is a "betrayal" and will lead to "handing the region over to chaos and destruction".

'Get out of our country'

The Turkish military controls large and strategic areas of northern Syria. Ankara has been supportive of rebel groups, and over the decade of Syria's war established a clientelistic relationship with several of them.

Turkish troops alongside Syrian rebel groups have fought Kurdish militants in northern Syria and occasionally Assad's forces as well. Turkey considers the Syrian Kurdish YPG militia a branch of the PKK militant group that has waged a decades-long insurgency against the Turkish state.

Ankara has threatened a fresh offensive against the YPG, and a suspected Turkish attack on Hasakeh, in northeast Syria, last Saturday left two children dead.

However, Turkish involvement in Syria's war, particularly in favour of the opposition, is becoming increasingly unpopular domestically. Officials and commentators have questioned the expense during a time of economic hardship, and hostility against the 3.6 million Syrian refugees in Turkey is heightening to a frightening degree.

Yet in Turkish-controlled areas of northern Syria, Ankara's footprint is huge. The Turkish lira has replaced the local Syrian currency, and many Turkish businesses and facilities have branches there. Turkey also controls local trade, the judiciary and education.

"We are sending a message to the Turks, get out of our country and leave us alone. We know how to run our country. Go and reconcile with  Assad alone. This is our land, and we know our interests," said Muhammad Badi, another protester in the al-Mastumah area.

Badi called on Syrian opposition leaders to distance themselves from Turkey and practice independence.

Another protester in northern Aleppo said: "We refuse for anyone to speak in our name, and we reject reconciliation with the Syrian regime, in any way. We are the sons of this land, and we have the final say."

Activists described the situation as the straw that broke the camel's back. Anger against Turkey has grown due to many factors, most notably the Turkish rapprochement between Russia and Iran, allies of the Syrian government, at the expense of the opposition.

Students protested last week in response to what they described as the injustice they endured while taking Turkey-supervised high school exams, and before that medical workers protested that they had been mistreated in Syria by Turkish doctors working in Syria.

Months ago, the northern Syrian city of al-Bab also witnessed mass demonstrations in response to the corruption of the Turkish-backed military police.

Some residents of Turkish-held northern Syria believe western support was cut off from rebel groups after they began to receive Turkish funding to fight the YPG, which gained support from the international coalition to fight the Islamic State group.

Many Turkish-backed rebels subsequently became mercenaries and were deployed by Turkey to fight in Libya and Azerbaijan.

Turkey has maintained a working relationship with Assad backers Russia and Iran, despite some violent flare-ups in recent years that threatened to escalate the Syrian conflict.

Through those relations, Turkey has helped implement a ceasefire that has largely held since 2017, brought the conflict to a nervous stasis and allowed the Turkish military to establish outposts across northwestern Syria.

However, many Syrians in opposition-held areas look at the Turkey-brokered agreements negatively, believing territory has been sold out without any solution in sight. Rebel breaches of the ceasefire agreement can be punished swiftly and forcefully: A rebel leader was jailed for two years for launching an offensive against pro-Assad forces in northern Aleppo.

In al-Mastumah, protesters want to see the rebels take up arms against Assad once again and resume the war that they believe Turkey has held back, despite nearly half a million people being killed since conflict broke out in 2011.

"We call on the leaders to open the fronts against Assad, to retake our areas and to return the displaced and the needy to them," demonstrator Younis al-Taher told MEE.

"They are begging for our suffering, Turkey is benefiting from refugees, it is getting international aid that Turkish employees have been benefiting from for years to take care of refugees, and yet they want to expel them."