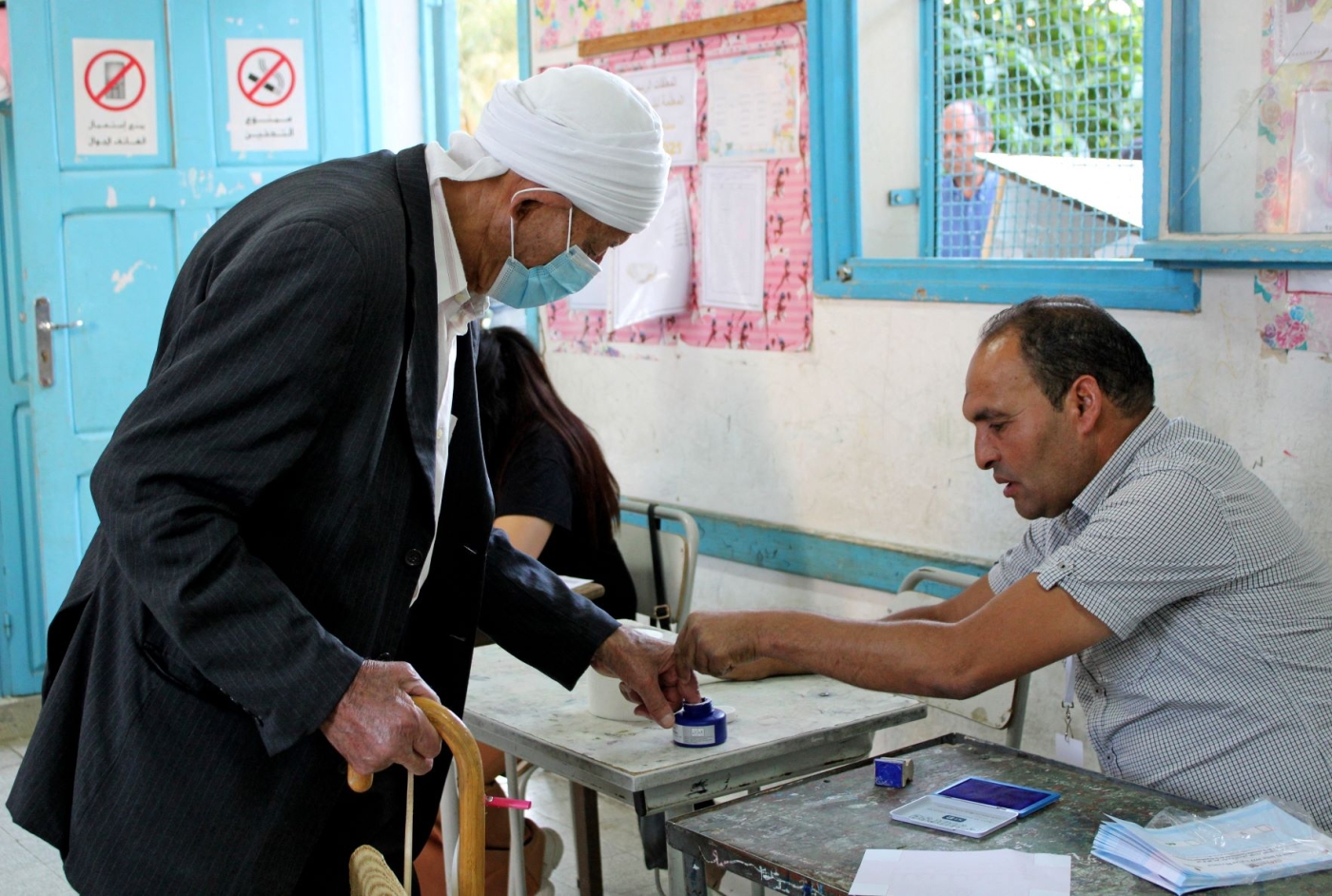 A Tunisian voting official assists an elderly man during a referendum on a draft constitution put forward by the country's President, Kasserine, 25 July 2022 (AFP)
By
Elis Gjevori
, Faïrouz ben Salah

In a polling station at La Marsa, a coastal town near Tunis, voting has been brisque as Tunisians took to the polls on Monday to vote on a new constitution that could see President Kais Saied enshrine one-man rule into law.

Lina, who had just voted, told Middle East Eye as she left the polling station that the new constitution would be a "huge step backward".

"It's ridiculous that someone writes a constitution on his own," she said, reflecting a widely held critique of Saied's proposed constitution as being largely a one-man operation.

The vote takes place exactly a year after Saied seized control of the country by firing Tunisia's government and dissolving its parliament, in what critics have branded a "coup".

Opinions on the new constitution, however, remain divided, and turnout - which was at 6.3 percent at 8:30 am - is expected to be low, with all major opposition parties boycotting the vote.

Wahid, another voter, told MEE that Saied "is my man. He helps the country move forwards."

An election observer on the ground, who didn't give his name, told MEE that interest in the constitution was high, and so far, voting had gone "very smoothly," adding that "we all want to change the political system".

Since his power grab, Saied has ruled by decree, with critics describing his actions as undermining the democratic gains made by Tunisia after the 2011 Arab Spring uprising that drove longtime ruler Zine El Abidine Ben Ali from power.

The referendum result, expected on Tuesday, will determine if Tunisia changes from a hybrid parliament system to a presidential one.

The new constitution will allow Saied to continue to rule by decree until legislative elections are held in December.

Yet the speed with which the constitution has been announced and the lack of debate and consultation has left critics wondering whether it will actually resolve or deepen the country's political woes.

In a report titled Codifying Autocracy, the International Commission of Jurists (ICJ), a ​​Geneva-based human rights organisation, condemned the process that produced the constitution and the referendum, saying it lacked a "legal basis, democratic legitimacy, inclusivity, accountability, and transparency".

If the constitution is adopted, as seems likely given the lack of unity among those opposing it and Saied's grip on power, the ICJ warns it would pose a "serious threat to the rule of law, the separation of powers - including, in particular, the independence of the judiciary - and to the protection of human rights in Tunisia".

The report's authors also expressed serious concerns that the president is not only enshrining unchecked power but under the new constitution, the independence of the judiciary, the electoral commission, and the constitutional court is in doubt, with their roles lacking clear guidelines. According to Bedirhan Mutlu, a researcher in Tunisian politics, Saied's constitution will almost certainly pass.

"Since the constitution was suspended last year, the country has been in a state of constitutional and legal void," Mutlu told MEE, adding that the referendum would at least bring an end to that situation.

However, he said he expected uncertainty in the country to deepen.

"Firstly, it was a very hastily written constitution and left many matters unclear. For example, we know very little about how the Council of Regions and Districts will function," he explained.

Saied's grand idea has been to have what he calls a "bottom-up democracy" through the Council of Regions and Districts, yet there is very little sense of what that would actually mean.

Secondly, said Mutlu, "the largest opposition parties are boycotting the constitution, and the opposition is not likely to end even though they have so far failed to form a united and powerful front".

All of which leaves the country lurching from one political uncertainty to another against the backdrop of a crumbling economy.

"There have been some figures calling for more severe measures against Ennahda, both [among those] close to Saied and in the opposition," says Mutlu, referring to Tunisia's main moderate Islamist opposition party, adding that "so far, Saied has acted relatively restrainedly".

"What matters though is not necessarily Saied's strategy going forward, but the fact that the new order lacks the mechanisms and institutions that can block the way of a future crackdown on the opposition."

Another reason why the opposition remains divided is the fear of being associated with the political deadlock that paralyzed the country before 25 July 2021, which many Tunisians considered an "abject failure," said Salih Yasun, a PhD researcher on Tunisian local governance and party politics at Indiana University-Bloomington.

'We need another political system...[Saied] will put an end to corruption, but in a proper way'

"The opposition thinks the moment they mobilise against the constitution, the public will take it as support of the situation before Said took power," said Yasun speaking to MEE.

Many opposition leaders are also wary of defending an era dominated by the Ennahda Party, adds Yasun.

Ennahda has come under increasing pressure in recent months, with Saied tightening the screws on the party's leader, Rachid Ghannouchi, who appeared in court days before the referendum.

Another aspect hampering the opposition's ability to resist Saied is their lack of local branches across the country.

"Even if they were to tell their voters to vote no, many of the parties lack the mobilisation capacity," said Yasun.

If Saied gets his way, the opposition will likely be significantly weakened, and the "president could have a few years to rule the country and implement his own social and economic agenda." However, the danger facing Saied is that Tunisia's problems have accumulated over decades, and there is no easy fix.

"If the social and economic problems persist, Saied could face new players to challenge his power or youth movements and civil society organisations who will publicise his shortcomings," explained Yasun.

Around 9.3 million people out of total Tunisian population of 12 million are eligible to vote, but no minimum participation has been set for a "yes" vote to pass, and no provisions have been made for a "no" result.

Rihma, a voter in the prosperous El Menzah 1 district of Tunis, said there needed to be a "big change" in the country's politics.

"We need another political system...[Saied] will put an end to corruption, but in a proper way," she told MEE.

Lotfi, another voter in the same suburb, said he cast his vote on Monday because the country "needs to get out of this situation."

"It was a complete anarchy. The future is uncertain, but we have to move on."