A journalist films the wreckage of a research centre in Barzeh, north of Damascus, on Saturday (AFP)
By
MEE and agencies

Western powers said on Saturday their missile attacks struck at the heart of Syria's chemical weapons programme, but the restrained assault appeared unlikely to shift the course of the seven-year-old civil war.

The United States, France and Britain launched 105 missiles overnight in retaliation for a suspected poison gas attack in Syria a week ago, targeting what the Pentagon said were three chemical weapons facilities, including a research and development centre in Damascus' Barzeh district and two installations near Homs.

The bombing was the biggest intervention by Western countries against Syrian President Bashar al-Assad and his superpower ally Russia, but the three countries said the strikes were limited to Syria's chemical weapons capabilities and not aimed at toppling Assad or intervening in the civil war.

The air attack, denounced by Damascus and its allies as an illegal act of aggression, was unlikely to alter the course of a multi-sided war that has killed at least half-a-million people.

"We believe that by hitting Barzeh in particular we've attacked the heart of the Syrian chemicals weapon program," Lieutenant General Kenneth McKenzie said at the Pentagon.

US President Donald Trump called the operation a success on Twitter and proclaimed: "Mission accomplished."

However, McKenzie acknowledged that elements of Syria's chemical weapons programme remain and he could not guarantee that Syria would be unable to conduct a chemical attack in the future.

In New York, US Ambassador to the United Nations Nikki Haley said at an emergency meeting of the UN Security Council that Trump told her if Syria uses poisonous gas again, "the United States is locked and loaded".

Russia later failed to win UN backing for a condemnation of the military strikes.

A Russian-drafted resolution won three votes at the Security Council, far fewer than the nine votes required for adoption. Eight countries voted against and four abstained.

The Russian measure would have condemned the "aggression" against Syria and demanded that the three allies refrain from any further strikes.

Russia said the US-led strikes would complicate UN efforts to broker a political solution to the conflict in Syria.

NATO secretary-general Jens Stoltenberg, however, called on Russia to "exercise responsibility" in the Syrian conflict.

"In this regard, the allies call on all supporters of the Syrian regime, notably Russia, to exercise responsibility to ensure that the Syrian regime participates constructively in the UN-led Geneva process," he said after a meeting in Brussels of the ambassadors of 29 NATO member countries.

British Prime Minister Theresa May described the strike as "limited and targeted," with no intention of toppling Assad or intervening more widely in the war.

Still, May faced a backlash from the domestic opposition after the air strikes.

As the Conservative leader explained her rationale for the military action, opposition parties claimed the attacks were legally dubious, risked escalating conflict and should have been approved by lawmakers.

The shadow of the 2003 invasion of Iraq still lingers in the corridors of Britain's parliament, when MPs backed then-prime minister Tony Blair in joining US military action.

Syria, meanwhile, released video of the wreckage of a bombed-out research lab, but also of Assad arriving at work as usual, with the caption "Morning of resilience".

Ten hours after the missiles hit, smoke was still rising from the remains of five destroyed buildings of the Syrian Scientific Research Center in Barzeh, where a Syrian employee said medical components were developed.

There were no immediate reports of casualties.

Russia had promised to respond to any attack on its ally, but the Pentagon said no Russian air defence systems were used. Syria fired 40 unguided surface-to-air missiles, but only after the Western strikes had ended, the Pentagon said.

"We are confident that all of our missiles reached their targets," McKenzie said.

The Western countries said the strikes were aimed at preventing more Syrian chemical weapons attacks after a suspected poison gas attack in Douma on 7 April killed as many as 75 people. They concluded Assad's government was to blame for gassing the Damascus suburb.

Washington described its targets as a centre near Damascus for the research, development, production and testing of chemical and biological weapons, a chemical weapons storage site near the city of Homs, and another site near Homs that stored chemical weapons equipment and housed a command post.

The Pentagon said there had been chemical weapons agents at one of the targets, and that the strikes had significantly crippled Syria's ability to produce such weapons.

"With the joint operation by US, UK and France on Saturday, the Syrian regime received the message that its massacres wouldn't be left unanswered," Erdogan told his ruling AK Party supporters in an Istanbul meeting.

"The innocent Syrian people should have been defended long ago," Erdogan added.

Inspectors from the global chemical weapons watchdog OPCW were due to try to visit Douma later on Saturday to inspect the site of the suspected gas attack. Moscow condemned the Western states for refusing to wait for their findings.

Russia, whose relations with the West have deteriorated to levels of Cold War-era hostility, has denied any gas attack took place in Douma and even accused Britain of staging it to whip up anti-Russian hysteria.

Still, the United States was confident the nerve agent sarin was used in addition to chlorine in the alleged Syrian atrocity that provoked Western military strikes, a senior official said on Saturday.

The senior US official, speaking on condition of anonymity, said analysis of images taken from the scene of last week's attack in Douma pointed to the use of the banned agent.

"And while the available information is much better on chlorine use, we do have significant information that also points to sarin use," the official said.

Syria agreed in 2013 to give up its chemical weapons after a nerve gas attack killed hundreds of people in Douma. Damascus is still permitted to have chlorine for civilian use, although its use as a weapon is banned. Allegations of Assad's chlorine use have been frequent during the war although, unlike nerve agents, chlorine did not produce mass casualties as seen last week.

Syria and its allies, however, made it clear that they considered the attack a one-off, unlikely to do meaningful harm to Assad.

A senior official in a regional alliance that backs Damascus told Reuters the sites that were targeted had been evacuated days ago thanks to a warning from Russia.

The Western countries were at pains to avoid further escalation, including any unexpected conflict with their superpower rival Russia. French Defence Minister Florence Parly said the Russians "were warned beforehand" to avert conflict.

Dmitry Belik, a Russian member of parliament who was in Damascus and witnessed the strikes, told Reuters: "The attack was more of a psychological nature rather than practical. Luckily there are no substantial losses or damages."

The Western intervention has virtually no chance of altering the military balance of power at a time when Assad is in his strongest position since the war's early months.

In Douma, site of the suspected gas attack, the last buses transported out rebels and their families who agreed to surrender the town, state TV reported. That effectively ended all resistance in the suburbs of Damascus known as Eastern Ghouta, marking one of the biggest victories for Assad's government of the entire war.

The Syrian army declared that all anti-government forces had left Eastern Ghouta, nearly two months into a blistering offensive on the rebel enclave.

"All terrorists have left Douma, the last of their holdouts in Eastern Ghouta," state news agency SANA quoted an army spokesman as saying, using the government's usual term for rebels.

Russian and Iranian military help over the past three years has enabled Assad to crush the rebel threat to topple him.

The United States, Britain and France have all participated in the Syrian conflict for years, arming rebels, bombing Islamic State (IS) group militants and deploying troops on the ground to fight IS. Still, they have refrained from targeting Assad's government, apart from the volley of US missiles last year.

Although the Western countries have all said for seven years that Assad must leave power, they have held back in the past from striking his government, lacking a wider strategy to defeat him.

On Saturday, Middle East carrier Kuwait Airways said it would resume all flights to Beirut on Sunday after a three-day suspension amid warnings about flying close to Lebanese airspace.

In a statement carried by the state news agency KUNA, the company said "the reasons that caused the suspension have removed".

Cyprus authorities made the warning on Thursday, the company said, following an announcement two days earlier from Europe’s air traffic control agency that asked carriers flying over the eastern Mediterranean to exercise caution because of possible air strikes into Syria. 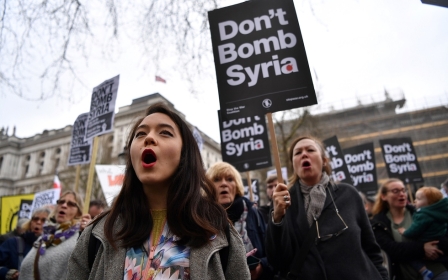