The return of the right of return 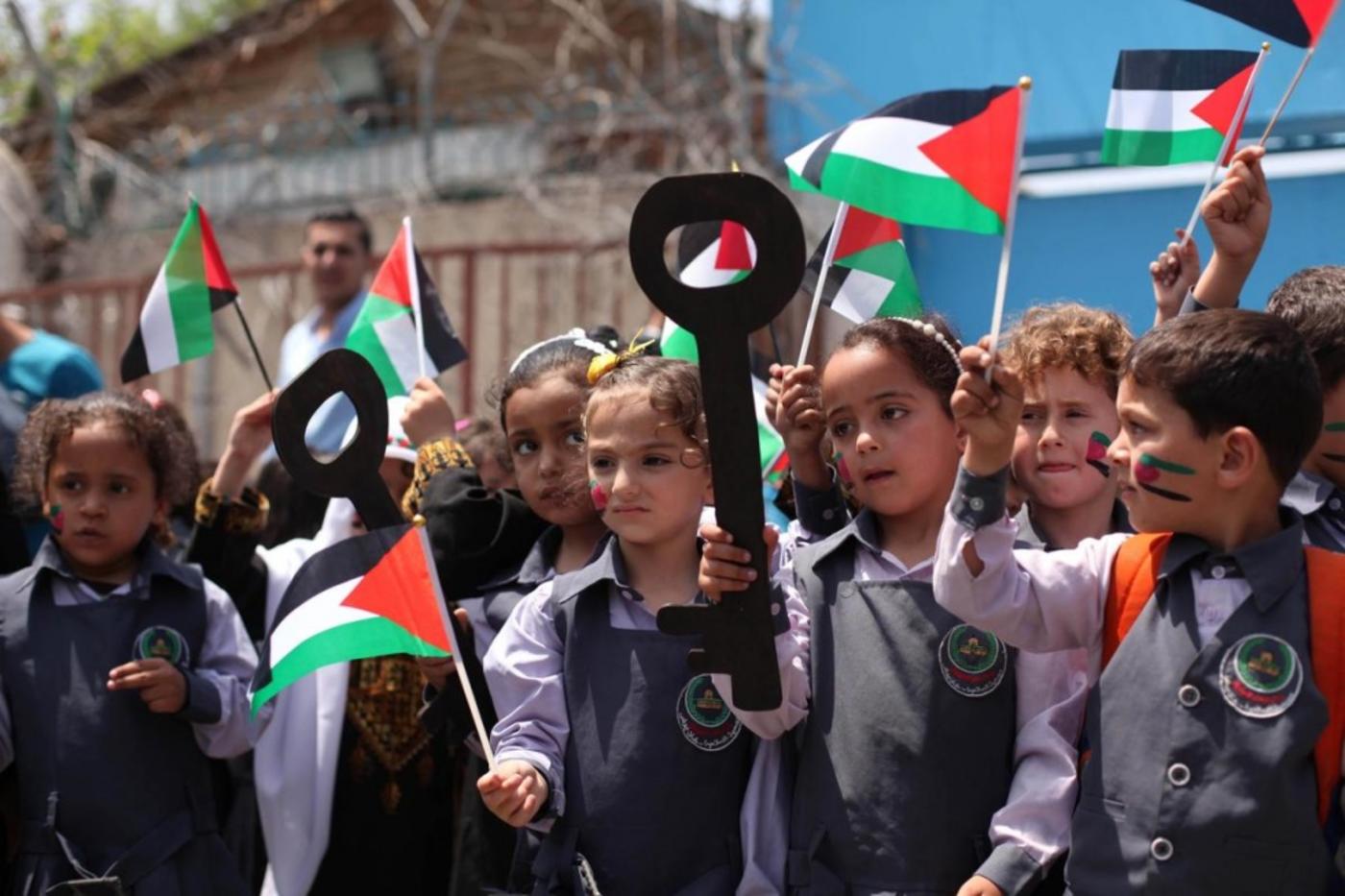 More than a decade ago I participated in usually frustrating meetings between Israeli and Palestinian journalists. The heated debate did not allow us to reach any understanding, especially in the most contested issue of them all, the question of Palestinian refugees. Palestinians took for granted that a just solution to this issue would be a part of any settlement, Israelis saw it as a threat on their very existence.
Yet at some point a question was raised by a journalist who was a Palestinian citizen of Israel. Why not allow for Palestinians who were uprooted from their villages in the 1948 war, but stayed inside Israel, to rebuild their villages if no new settlement had been built on them during these long years? After all, he stressed, these Palestinians are already Israeli citizens. The Israeli journalists, who only minutes ago fought vehemently against any form of right of return, surprisingly  agreed.
Right of return for Palestinian refugees is maybe the greatest taboo in Israeli Jewish society. The decision to see the flight of Palestinians from their villages and towns as a “fait accompli” was formulated by Israeli authorities as early as June 1948, a few weeks after Israel declared itself an independent state, and it has not really changed ever since.
"A wonderful event in the history of this land has happened," wrote Moshe Sharet, Israel's first foreign minister, in June 1948, referring to the Palestinians fleeing their homes – "to a certain extent, it is even more wonderful than the creation of the state of Israel." What represented a Nakba, a disaster, for the Palestinians as individuals and as a society, remembered with pain and anger to this very day, was considered by Jewish leaders as a miracle. It is hard to imagine more different discourses.
Internally displaced Palestinians
From its first days, Israel dodged any resolution or proposal aimed at allowing for some or all the 750,000 Palestinians refugees to return to their homes in what had become sovereign Israel. Over the years, even mentioning the right of return for Palestinian refugees was conceived in Israel as a threat.
Yet while international and even Palestinian attention was focused on the plight of those refugees who were driven out of their home country, less attention was given to those refugees who had been uprooted from their villages and towns, but somehow managed to stay within the boundaries of the new state.
It is estimated that the number of these "internally displaced" Palestinians in 1948 was 35,000 people, about 20 to 25 percent of the total Palestinian population inside Israel. There are no official figures about their numbers today, but it is fair to assume that the internal refugees and their descendants still represent 20 to 25 percent of the total Palestinian population in Israel, meaning 300,000 to 350,000 people.
Their situation has been and still is even more difficult than their fellow Palestinians living in Israel. As Israel did not allow them to return to their villages, which were later destroyed, they found it very difficult to buy property and build new homes in the already crowded and impoverished Palestinian villages in which they settled. As most of them were peasants before 1948 and as all their lands were confiscated, they had almost no choice but to  become manual labourers.
Neither the Israeli government nor the international community took efforts to help these internal refugees to recover. At the same time, it was not easy for them to integrate in their new Palestinian communities which sometimes looked at them with suspicion. In short, they were the strangers of the strangers.

Yet interestingly enough, it was the internal refugees who helped create new awareness of the Nakba among Palestinian citizens of Israel. Eitan Bronstein, the founder of the Zochrot organisation dedicated to the remembrance of the Nakba, remarks that it was the Association for the Defence of the Rights of the Internally Displaced which started the Nakba Day processions to the ruins of the villages destroyed in 1948 and afterwards.
The fact that the Oslo agreements completely ignored the refugee issue, explains Bronstein, pushed Palestinians to take this question into their own hands. Until then, he adds, the Nakba was remembered as a personal or family event. The processions to the abandoned villages, which attract tens of thousands of Palestinians on Israel's Independence Day, turned the memory of the Nakba into a political and cultural matter.
Elain Khouri, a Palestinian citizen of Israel who is an architect and artist, was born in the village of Fasuta to a father uprooted from nearby Sukhmata village, and a mother uprooted from Ikrit village.
Her father, who came from a distinguished family in Sukhmata, worked in construction, building homes for new Jewish immigrants. Her mother's relatives, she remembers, never stopped feeling miserable and victims in the village in which they settled after being uprooted from Ikrit.
Khouri could have been described as "integrated" into Israeli society. She lives in Haifa, works as a designer, is married to a successful doctor and her son excels in violin. But like many Palestinians of her generation, she does not let the memory of the destroyed villages pass away.
In an exhibition in Tel Aviv two months ago, Khouri and artist Yaakov Hefetz tried - through video art of Khouri walking through the ruins and old maps - to revive the destroyed village of her father, Sukhmata. "We cannot let memory dwindle away," she wrote in a paper distributed to the visitors.

An issue of civil rights

The Association of the Internally Displaced People, recalls Bronstein, went even one step further and drafted a plan for the rebuilding of one of the destroyed villages. The plan was not approved, as expected, but it challenged the Israeli authorities, as it turned the right of return from an abstract - and frightening - notion into a civil issue: the right of Israeli citizens to go back to the lands taken by their own government.
Ayman Odeh, the chairman of the Joint List, who seems to take pleasure at challenging Jewish public opinion, is going in the same direction. After the last Nakba Day march which took place 10 days ago, he wrote on his Facebook page that the right of the internally displaced people to return to their villages is "a moral and just right" and that they should be permitted to go back.
Odeh pointed out that the lands of most of the destroyed villages "stand empty" and therefore there is no fear that their return will create new injustice. "On the contrary, their return will mend an historic injustice and yield moral, national and civil benefit to all citizens, Jews and Arabs alike," wrote Odeh.
As the discussion with the Israeli journalists may tell us, such a line of politics may break the psychological barrier when dealing with the right of return. When Israeli Jews hear these words, they immediately see a conspiracy to flood Israel with millions of refugees, who will destroy the "Jewishness" of the state. Turning it into a civil-rights issue might make it easier for them to understand the human injustice in preventing people from going back to their villages.
Of course, Odeh plays a very delicate game here. Even hinting that the internally displaced Palestinians might be allowed back to their villages without solving the problem of the refugees outside Israel is unacceptable to Palestinian public opinion, in Israel or outside it. He also emphasised the need for an overall solution to the refugee problem. Khoury recalls that one of her uncles told her that Sukhmata refugees living in Lebanon "count on us that we will bring them back to their homes".
Implementing any sort of return, even a small and symbolic one, seems virtually impossible in the current political situation in Israel. Israeli authorities refuse to let refugees come back to two villages - Ikrit and Bir'am - contrary to a decision by the High Court to let them return. Yet Odeh's move, together with other similar initiatives, maybe represent a beginning of a change in the language with which Israelis talk about the Nakba. This could be an important step forward.
- Meron Rapoport is an Israeli journalist and writer, winner of the Napoli International Prize for Journalism for a inquiry about the stealing of olive trees from their Palestinian owners. He is ex-head of the News Department at Haaertz, and now an independent journalist.

Photo: Palestinian primary school students gather outside the UN office to commemorate the 67th Anniversary of Nakba, in Gaza, Gaza City on May 13, 2015.(AA) 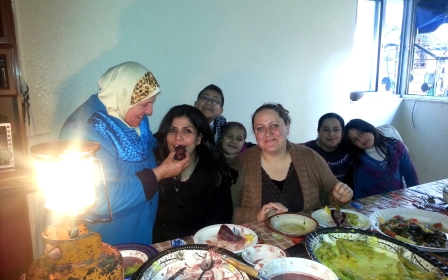 Nakba
Reflections on Nakba by a Palestinian trapped outside the cage 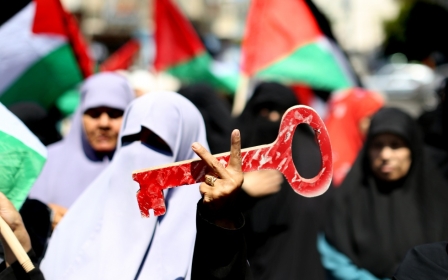 Nakba
The Nakba 67 years on: Holding on tight to our long postponed dreams
Ghada Ageel 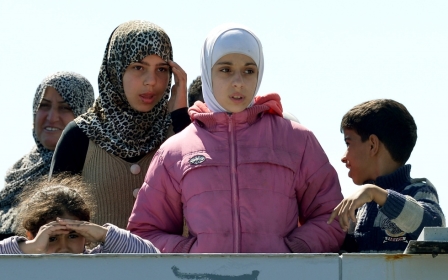