Most are Americans who have studied the language and are happy to have found a place to practice casually among their peers. Others are native Arabic speakers hanging out to help those still learning.

The space is crowded and dark - but the discussions are lively and loud as patrons struggle to hear and be heard over the music.

This is The Green Zone - a Middle Eastern-inspired bar like no other in the US capital.

"It's fun and people really like it, so that's great," says owner Chris Francke, about the now-monthly "no English allowed" event.

'It's a safe space in Washington, whether you're Middle Eastern or Muslim or not at all'

It's the second time that Conversational DC, a language immersion social club, has brought its Arabic night to The Green Zone - and the response has been overwhelmingly positive, Francke says.

He conjured up the idea of opening The Green Zone about four years ago. Then working at the World Bank, he decided he was ready to shed his suit and start his own business.

Francke, an Iraqi-American, had already begun creating cocktail recipes from scratch (his first was a liquored-up version of Turkish coffee). But he wanted a hub that would bring people together and celebrate a culture not commonly known for consuming alcohol.

After testing recipes on friends, he initially opened The Green Zone as a pop-up, taking over other established bars on random evenings to serve his creations.

From pistachios to mint, apricot, lemon and pomegranate, Francke brought the flavours of Iraq to the Washington bar scene.

Within a couple of years, he rented a space in DC's hip Adams Morgan neighbourhood. And in 2018, with the renovations complete, he opened The Green Zone's brick-and-mortar spot, named after the International Zone of Baghdad that the US established in the Iraqi capital following its 2003 invasion.

"It's a safe space in Washington, whether you're Middle Eastern or Muslim or not at all," Francke says.  "It's very international - it's not just Arabs or Persians or Turks or Armenians who come here. We have a lot of people from outside those backgrounds who have studied the region or are just fascinated by what we're doing."

The bar is filled with Arabic music and songs from the many singers featured in framed posters on the walls. Lebanese icon Fairuz and Syria's Omar Souleyman are obvious favourites.

But one of The Green Zone's most whimsical decor choices is a large metal cylinder near the entrance, covered in camouflage netting and a red Arab Kuffiya scarf. Next to it is a wooden sign: "Not a W.M.D."

The tank is filled with liquid nitrogen, used to make fancy smoking cocktails and to cool down bar glasses.

"We just didn't want the tank to be an eyesore," says one of the bartenders with a laugh.

Francke says he never imagined that the bar would become a political space - but that was before the 2016 US presidential election ushered in Donald Trump.

"Since the Trump administration came in, it's become a lot more political," he says.

"At the pop-ups I used to have one featured drink about the news of the week. For example, when the Muslim ban stuff started I had a drink called Refugees Are Welcome Here," he says.

Upstairs, where the Arabic night is taking place, a poster of Trump hovers over the crowd. It reads "Trump Eres Un Pendejo", which loosely translated from Spanish, means "Trump is an idiot".

That's not the only subversive symbol at The Green Zone though; Francke says one of the most popular cocktails on the menu is the FUCK TRUMP! punch. In January, the phrase "Impeach the Motherfucker!" was listed in the drink's description. Those words were uttered by Rashida Tlaib, the first Palestinian-American member of Congress, shortly after her swearing-in ceremony this year.

But Tlaib's line has been replaced with a new political reference, this time about Trump's relationship with right-wing Brazilian President Jair Bolsonaro and the recent wildfires that have ravaged the Amazon. "Donald and Jair Sitting in a Tree, Which is B-U-R-N-I-N-G. Fuck Those Two!" the description now reads.

For Francke, it's simple: "Before Trump became president, [the drink] was called the 'Fuck ISIS Punch', but ISIS [Islamic State (IS) group] kind of disappeared around the same time Trump appeared, so we thought: 'What's the biggest threat to us now?' Definitely Trump."

But despite taking such strong political positions, the bar - which has leftist symbols on almost every wall - hasn't experienced any kind of blowback. Francke says no one has  complained about the anti-Trump vibe at the bar, or stirred any anti-Arab or Islamophobic trouble over its Middle Eastern theme.

"We have Arabic writing pretty big, right out front," says Francke, referring to the bar's sign, which features its name in English and Arabic in big green letters.

"So anyone who is going to have a problem with anything we have to say here is just not going to come in anyway. It's almost like the bar self-selects cool, tolerant people."

How to learn Lebanese slang

Back at the Arabic language event, Maddi Fisher and Benjamin Lutz take the "no English allowed" rule to heart.

Both in their early 20s, Fisher and Lutz speak Arabic almost fluently, having met during a language course they took together in Amman, Jordan.

Lutz undertook most of his bachelor's and master's degrees in the Middle East, and he says he has missed being able to speak the language on a regular basis. "It's awesome to find a community of Arabic speakers; it's really hard to find those spaces in America," he says.

Most of the Arabic taught in US universities is Modern Standard Arabic (MSA) - also known as "Fusha" (pronounced Fus-Ha).

But MSA is more common among news readers than night clubs, and it isn't normally spoken on the streets of Arab countries. It also can be difficult to find an Arabic-language course that teaches the dialects of the region, even though those dialects are the forms of Arabic most commonly used by native speakers.

"It's difficult sometimes to understand some of them, between the Fusha and the accent," Francke says, laughing. "But we get by. It's really a fun time, actually."

For her part, Fisher says she loves learning the different dialects. "The cool thing about a space like this is you get a chance to learn like, some Algerian word that you didn't know or some Lebanese slang," she says. "It's all a great mixture of dialects; it's really interesting."

'I don't get to use my Arabic very much, so this is really exciting'

Claire Gellner, 27, began learning Arabic when she was 16 through a special programme at her high school. She quickly fell in love with the language and even went on to get her bachelor's degree in Arabic.

"I don't get to use my Arabic very much, so this is really exciting," Gellner says. "Language is something you can study on your own, [but it] is meant for talking to people.

"That speaking element is really critical, especially with a language like Arabic, where the written word is so different from what is spoken."

The "no English allowed" nights can also help introduce people to the Arabic language, and to the diverse cultures of the Middle East, says Fisher.

She says she plans on bringing some of her non-Arabic-speaking friends next time, as many would be surprised to hear that a bar inspired by the region exists in Washington.

"You definitely see that here," Fisher adds, motioning at the diverse crowd all around her. "It's great." 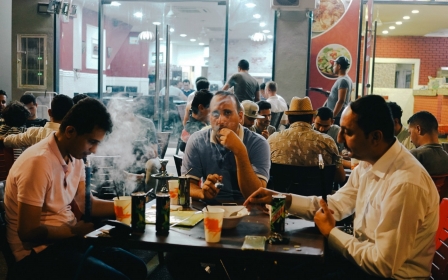 Food & Drink
In pictures: The Yemeni cafes of Kuala Lumpur 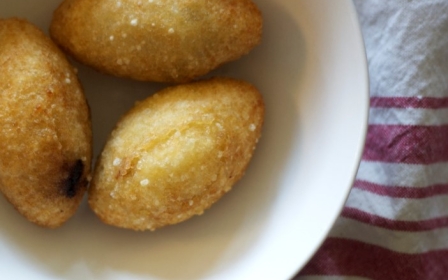 Recipes
How to make fried kibbeh from Iraq