Nabil Karoui's campaign deny he has anything to do with $1m deal with Canadian lobbying firm. But firm's head says he was hired to pitch Karoui as a Libyan peacemaker The plan, at least according to the lobbyist who says he was behind it, was to sell Karoui on the international stage as a regional peace-maker who could host Libyan peace talks between self-styled military leader Khalifa Haftar and the internationally recognised government in Tripoli.

'This wasn’t just a lobbying exercise. This was for real'

But the strategy soon ran off the rails. The Tunisian courts refused to release Karoui to campaign for the elections, and then news emerged of the $1m lobbying contract taken out on his behalf.

The publication last week in US Department of Justice filings of the contract in which Montreal-based Dickens & Madson pledged to lobby the US government and other foreign powers to support Karoui to become president has prompted a flurry of accusations, denials, legal threats and counter-threats.

Karoui faces Kais Saied in a runoff vote this Sunday between the top two candidates in last month’s first round of voting, despite having been in prison since mid-August on suspicion of money laundering and tax evasion charges which his supporters say are politically motivated.

In a series of statements, lawyers for Karoui have denied any connection with or knowledge of the $1m contract filed on the DOJ’s Foreign Agents Registration Act database and have filed a legal complaint against anyone involved in it.

They also say that Karoui has no connection with anyone called Mohamed Bouderbala, whose signature appears on the contract but whose identity remains a mystery.

Abdelaziz Belkhodja, a member of the political bureau of Karoui's Qalb Tounes party, told MEE he believes the story is made up. Karoui, he said, is "very far from needing" lobbying help. It's rival party Ennahda, he said, that orchestrated "everything".

But the publication of the contract has prompted others to call for Karoui to be disqualified from Sunday’s contest for allegedly breaking election rules and inviting foreign interference in the country.

Officials with Prime Minister Yousef Chahed’s Tahya Tounes party told a local TV station that they plan to file a complaint against Karoui.

And left-wing politician and lawyer Mohamed Abbou, who also ran for president but failed to secure a place in Sunday's runoff, has already filed a complaint over the Dickens & Madson contract as well as two other lobbying agreements involving the head of 3ich Tounsi (Live Tunisian) and Ennahda.

Meanwhile, Ari Ben-Menashe, a Tehran-born former Israeli intelligence officer who founded Dickens & Madson, initially said last week he was unsure whether Karoui knew about that contract, but later told Middle East Eye he had agreed to work with the campaign after meeting him in Tunis in August.

In the latest twist, Ben-Menashe also told MEE that Bouderbala had subsequently contacted him via email to cancel the contract.

But when MEE emailed the same email address to seek more details, the account holder replied: “You must be mistaking me for another Bouderbala.

“I’ve seen the name relayed, but I have nothing to do with this case.”

MEE sent a list of questions to the Karoui campaign late on Monday, including whether Bouderbala had been instructed to cancel the contract and what relationship Karoui has with Bouderbala.

The campaign had not answered MEE's questions at the time of publication. On Tuesday afternoon, it released a statement saying Karoui was refusing to speak to anyone, including journalists, to protest his ongoing incarceration.

MEE asked Bouderbala why his email account was used to cancel the contract, and if he denied sending that email. He had not responded at the time of publication.

Questions about Bouderbala’s identity are among a number of unresolved issues and discrepancies that have emerged over the course of several days in which MEE has quizzed both Ben-Menashe and members of Karoui’s campaign team about the alleged contract between them.

The US DOJ has not responded to multiple requests for comment from MEE.

Two contracts, not one

According to Ben-Menashe, the contract filed with FARA was a second version of a contract for lobbying work which he had signed following dinner with Karoui and his wife, Salwa Smaoui, at their house in Tunis on 19 August.

This version of the contract, he said, was signed between a UK-based affiliate of Dickens & Madson and a senior member of Karoui’s team. Smaoui, he said, paid part of the contract's initial $250,000 tranche. MEE has not seen a copy of this purported initial contract.

Ben-Menashe also said he had been contacted by Karoui’s team after the candidate’s arrest on 23 August. According to his account, a lawyer in Karoui’s team asked him if it was possible to change the contract from the UK affiliate to Dickens & Madson to show Karoui had representation in the US.

That contract, which was signed by Bouderbala, was backdated to the date of the original one, 19 August, Ben-Menashe said.

Because Karoui was by then in jail, Ben-Menashe said he did not know whether the candidate was aware of the change of contract.

Ben-Menashe told MEE that he was ready to continue working with Karoui despite his campaign’s denial that it had or had ever had any relationship with his firm. To save Tunisia’s democracy, both candidates must be heard equally
Read More »

According to Ben-Menashe, the pair had been working on a plan for Tunisia to host Libyan peace talks, which was why the contract focused on lobbying US President Donald Trump and Russian President Vladimir Putin.

He said the initiative also had the support of eastern Libyan military commander Khalifa Haftar, currently waging an offensive against the internationally recognised government in Tripoli, who has also been represented in the past by Ben-Menashe’s firm.

MEE put Ben-Menashe's account to Karoui's campaign but did not have answers at the time of publication. MEE has also attempted to reach Smaoui for comment. 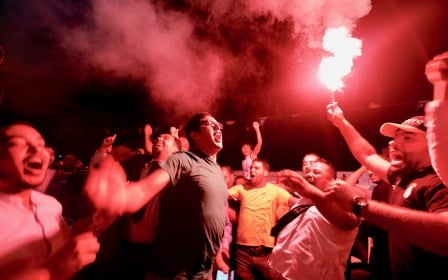