As Muslims in Britain prepared to celebrate Eid al-Adha late last month, things took a turn for those living in the country's north, with the government announcing a last-minute ban on indoor gatherings in a number of areas.

People had just a few hours of notice to take in these new lockdown rules. For many Muslims, this meant rearranging plans, including for travel. What baffled many was that while you could not meet with family members in their homes, you could meet at restaurants or pubs.

What struck me most about these lockdown rules being delivered to the people via Twitter a few hours before enforcement was the media coverage. I was intrigued by how prominent news outlets covered the new rules, and especially by the images they used.

Most of the images showed visibly Muslim women in hijabs and jilbabs. Some depicted South Asian women in saris and shalwar kameezes.

Muslim women's bodies have become a site for political point-scoring. Her aesthetic choices make her hyper-visible, but simultaneously invisible

Why is it important that we pay attention to the images used? When stories are negatively discussing certain areas in the UK and noting a rise in coronavirus cases, it is worrisome that, yet again, we see pictures of ethnic minorities, especially Muslims. Studies have already shown how media coverage of Muslims, particularly visible Muslims, contributes to negative stereotyping.

The Muslim imagery used, and the timing of the lockdown, tapped into fears that Muslims are super-spreaders, despite no evidence of this. While the Muslim community makes up four percent of the UK's population, they appear to bear the brunt of the failings of the state.

Swinging on a pendulum

But what I have found especially fascinating is how the images are mostly of women. This illuminates many things. The West's curious obsession with the veil
Read More »

Historically, Muslim women have been constructed as passive, oppressed by Muslim men and needing saving - yet still posing a threat to the social fabric of society. Former First Lady Laura Bush even made the argument that the invasion of Afghanistan was necessary for the liberation of Afghan women.

Muslim women's bodies have become a site for political point-scoring. Her aesthetic choices make her hyper-visible, but simultaneously invisible. She is forever swinging on a pendulum between dangerous and passive.

The Muslim woman is weaponised, portrayed as always carrying the potential to cause a rupture. Her body invokes anxieties, despite being on the margins of society.

When news sites deploy these images, it adds to the already-established anxieties around Muslims. It enables and facilitates the notion that Muslims are always causing trouble, never quite knowing their place. Muslim women's bodies, in particular, are used as a social management tool. She is burdensome, but also invites the gaze of those eager to use her.

An article in the Guardian about the ban on indoor meetings used an image of a South Asian woman in a shalwar kameez, although her religion was not clear. The use of ethnic minorities in such pictures is disingenuous. These very communities are impacted by Covid-19 more than others, and face more significant barriers to protecting themselves due to racism and discrimination.

It is easier to shift blame onto those with the least power in society, because this absolves the government of its responsibilities

So why has the "other" become the more compelling image to use? If there was a history of portraying Muslims and ethnic minorities in a positive light, I might have seen these images differently. But that is not the case.

Images carry meaning. The disproportionate focus on minority communities, including Muslims, is part of a long tradition of scapegoating "othered" communities. It is easier to shift blame onto those with the least power in society because this absolves the government of its responsibilities and unmasks its failures.

Fatima Rajina
Fatima Rajina is an academic specialising in issues related to identity, race, British Muslims and postcolonialism. Dr. Rajina is also a research Fellow based at the Stephen Lawrence Research Centre. She [email protected] 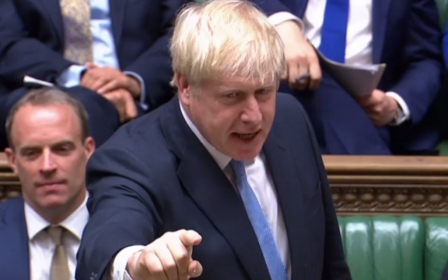 Covid-19
A California prison or an Istanbul mosque? Why the media links coronavirus to Muslims
Belen Fernandez