The PJD has forgotten that in Morocco, only the palace governs

Ali Lmrabet
Since the rule of Hassan II, the Moroccan royal palace has skilfully exerted its powers of attraction and dissuasion over politicians, labour union leaders and public figures of all stripes 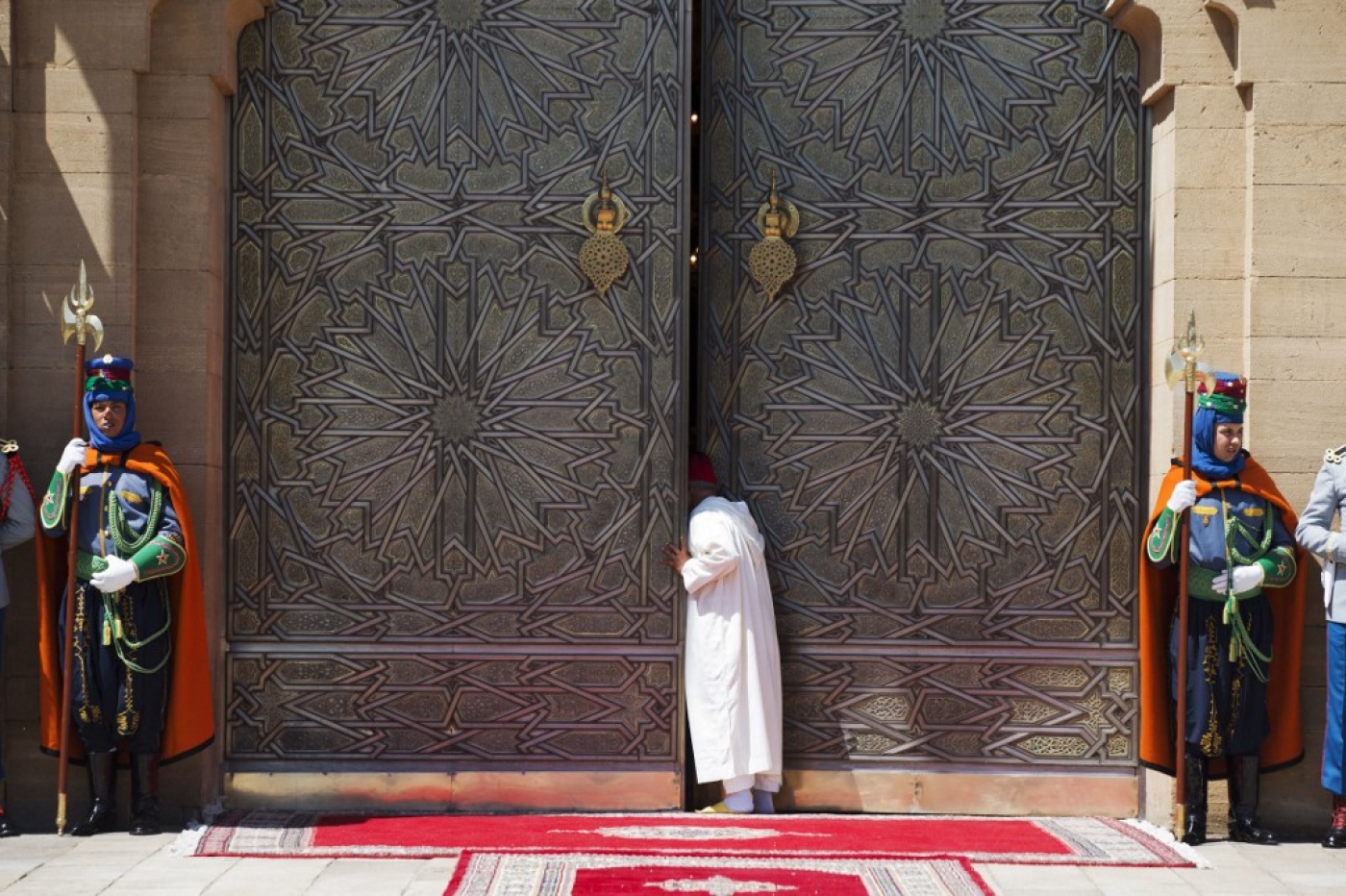 A Moroccan official looks into the royal palace in Rabat (AFP)

The death on 7 September of trade union leader Noubir Amaoui, the founder and former secretary general of the Democratic Confederation of Labour (CDT), might have been an omen for the leaders of Morocco’s incumbent Justice and Development Party (PJD).

Morocco’s legislative elections were being held the next day. Amaoui was all but forgotten, and the long-ruling PJD, led by former Prime Minister Saadeddine Othmani, was likewise consigned to the political dustbin.

Amaoui is a textbook example of how a onetime outspoken politician, notorious for fierce attacks - bordering, at times, on incitement to revolt - was brought into line, with a little carrot and a lot of stick, losing every shred of political credibility in the process.

The time was ripe to move Morocco's institutions in the direction of a true parliamentary democracy. Instead, Youssoufi chose the path of personal ambition

The Amaoui affair can be summed up as follows: in a 1992 interview with the Spanish newspaper El Pais, Amaoui described the Moroccan government as a “gang of thieves”. He stood trial, was sentenced to two years in prison, and received a royal pardon after serving 14 months. Amaoui would then undergo a political sea change, donning the cloak of responsibility to serve “the best interests of the nation”. And so, he duly entered the ranks of the political establishment.

Among other things, this meant distancing himself from railway workers during a national strike in 1995, and abandoning the miners of Jebel Aouam, in central Morocco, in their heroic fight for survival a few months later.

Since the rule of Hassan II, the Moroccan royal palace has skilfully exerted its powers of attraction and dissuasion over politicians, labour union leaders and public figures of all stripes. Few are capable, or even willing, to break free of its powerful orbit.

The late sovereign even pulled off the extraordinary feat of converting the leaders of the Party of Progress and Socialism (PPS) - formerly communist and notoriously atheist - to the cult of religion. After imposing mandatory pilgrimages to Mecca, he showered them with the privileges of bourgeois life. The collapse of the 'Moroccan exception' myth
Read More »

The Socialist Union of Popular Forces (USFP) has done some shapeshifting as well, always under the umbrella of the royal palace. Former party leader Abderrahmane Youssoufi seemed impervious to the allurements of the royal palace, owing no doubt to his history of resisting French imperialism and vocally opposing the regime of Hassan II, in the face of imprisonment and forced exile.

But Youssoufi ultimately embraced Hassan II, signing up to the autocratic ruler’s “democratic alternative” - a coalition government with “sovereign ministries” operating beyond his control. In Youssoufi’s subsequent mea culpa, he said his sense of “responsibility” and the defence of “national interests” prompted the about-face.

In 1999, Hassan II died of a heart attack. Having been aware of the former king’s poor health, Youssoufi, a shrewd and resourceful politician - who in theory served the interests of the people, rather than those of the system - could have easily forced the regime’s hand on issues beyond electoral reforms and economic trifles. The time was ripe to move Morocco’s institutions in the direction of a true parliamentary democracy. Instead, Youssoufi chose the path of personal ambition.

The USFP would pay dearly, losing its place as the country’s premier political force and squandering part of its voter base.

Would the PJD sell its soul?

When the PJD Islamists first came to power in 2011, many people believed the “devout” hardliners of political Islam had the religious and moral capacity to stand up to the regime. With a strong electoral base, a reputation for moral integrity and the charismatic Abdelilah Benkirane at its helm, the PJD could afford to play the role of faithful palace consort, rather than mere executor of royal orders.

It agreed to the principle of working in tandem with the palace, assuming there would be time later for necessary compromises. To establish its image as a “responsible” government party committed to serving the country’s “national interests”, the Islamists needed to master the art of political compromise.

The PJD went to great lengths to convince its followers that it would never sell its soul. It had no idea what lay ahead

At the same time, the PJD went to great lengths to convince its followers that it would never sell its soul. It had no idea what lay ahead.

The new head of government rapidly reneged on the promises and demands of the February 20 Movement, the massive demonstrations across Morocco that forced the palace - in the throes of a panic attack - to make some concessions.

The PJD sent into oblivion some promises that had helped bring it to power. Defunding Morocco’s controversial international music festival ceased to be a priority. Meanwhile, the mass humiliation of the loyalty ceremony, in which officials pledge allegiance to the king, was hailed as a founding tradition of the monarchy. At the same time, sacrosanct PJD talking points on Islamic values and regime corruption suddenly disappeared.

Even more surprising - and more alarming for the kingdom’s most impoverished populations - Benkirane donned the cloak of free-market liberalism, curbing public hiring and cutting subsidies, including welfare programmes.

And yet, his list of servile credentials wasn’t enough to keep the charismatic head of government in the royal good books. Benkirane was sacked by the king in 2017, and subsequently ousted by his “brothers” from the PJD’s leadership, presumably at the behest of the only place in Morocco where such decisions are made: the royal palace.

King Mohammed VI nevertheless made a great show of his goodwill, offering the deposed prime minister a luxury car and a monthly stipend of 70,000 dirhams ($7,700), in a country where the minimum wage is a mere 3,000 dirhams.

And thus, like the lions-turned-lapdogs who came before him - the surly Amaoui and the old fox Youssoufi - Benkirane, with all his astuteness, ended up in the cemetery of the regime’s illustrious victims.

His successor, Othmani, had no need to break with his predecessor’s habit of renunciation and subservience. He was naturally predisposed that way; the even-tempered psychiatrist had none of his predecessor’s outspokenness and exuberance, and he willingly accepted leading yet another piecemeal government, with the royal palace again controlling strategic ministries and key policy directions. In short, Othmani was little more than a cardboard cutout on the political stage.

In 2017, he stood by as security forces violently clamped down on Hirak protesters in the Rif region. Later, he didn’t even pretend to want to resign when the interior minister, his theoretical subordinate, forced through a reform of the country’s electoral laws, allegedly meant to benefit smaller parties but actually devised to weaken majority parties, particularly the PJD, and further divide parliament.

The stalwart supporter of the Palestinian cause also had to swallow the bitter pill of normalising relations with Israel.

On 8 September, his party’s resounding defeat in Morocco’s legislative elections and his immediate resignation as the PJD’s secretary general brought to a close the dismal chapter of his four-year stint as head of the country’s so-called executive branch - governing only in name.

Because in Morocco, governing is done by the palace alone - and sharing even the slightest shred of power with opposition groups is utterly out of the question.

The terms “responsibility” and “national interest” might express a fundamental duty to serve the nation to the minds of some political organisations. For the rapacious Alawite dynasty, however, they are empty catchwords, summoned to maintain the status quo of ruling, governing and doing business. Morocco: The 'deal of the century' and the misfortunes of Mohammed VI
Read More »

Morocco has yet to enter an era in which a party, backed by the weight of its electorate and fair parliamentary representation, can draw a bold, yet legitimate, line between its prerogatives and those of the kingdom’s omnipresent and all-powerful ruler.

Only when such a party is willing to reject the royal dictates and to confront, if need be, the wrath of the royal cabinet, will Morocco truly enter a new era.

In the meantime, the one good thing about the results of this month’s legislative elections - which no doubt deserves a much longer analysis - is that, contrary to his predecessors, the new head of government, billionaire business tycoon Aziz Akhannouch, won’t have to be yanked about by the king like a puppet on a string. He’s the Moroccan sovereign’s friend and right-hand man.

Akhannouch’s achievements will align with those of the king. And so will his failures.